For many, foster care may be a foreign concept, but after 32 years of fostering so many children their photos could cover their lounge room walls, Linda and Trevor Wheeler say it is all about family, albeit a large one.

Ellie Constantine spoke to the Wheelers, and two of their children, for Foster Care Awareness Week this week. 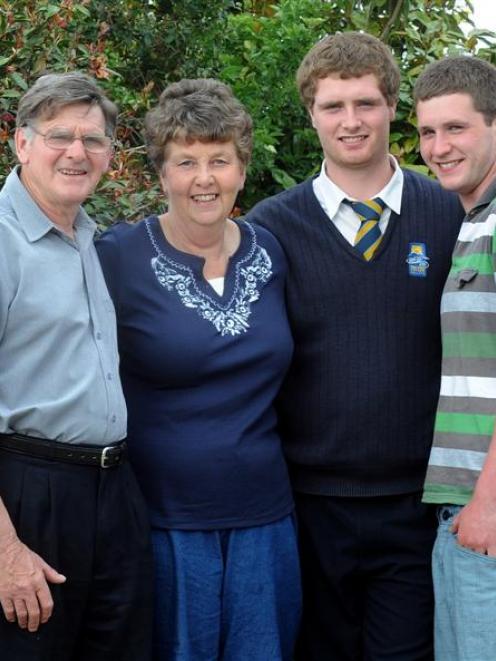 Foster parents Trevor and Linda Wheeler with their foster children, Rodger (18) and David (20) Larson-Hewitt, in Mosgiel. Photo by Craig Baxter.
When people ask David Larson-Hewitt about his family, he says, "they don't really get it". The 20-year-old Dunedin man was placed in foster care when he was 11 hours old.

He has lived with Trevor and Linda Wheeler in their Mosgiel home ever since, with siblings including 18-year-old Rodger joining him along the way.

Although living in a home with countless other children coming and going was often "interesting", Mr Larson-Hewitt would seriously consider fostering children in the future.

His brother, on the other hand, said it "depends on what the wife says".

Rodger joined the Wheeler household when he was 9 and only "occasionally" saw his birth mother. The brothers were not able to divulge how they came to be in foster care.

Mr and Mrs Wheeler were Mum and Dad to him. The couple began fostering children about 32 years ago.

With one adopted and three of their own children, they started taking in foster children "just for the weekend", Mrs Wheeler said.

"It's the biggest privilege that you can put something into some other person's life. It's the most worthwhile, sometimes rewarding, experience ever."

They admitted "quite a few" children had been through their five-bedroom home, but would never count them.

"We always say that this is number one. People always ask: `How many have you had?', as if it's a scalp on your belt, and that really upsets me."

However, she did say: "If we put photos around, you could just about wallpaper the lounge".

One of the "biggest thrills" over the years was being contacted by a former foster child who had only lived with the Wheelers for a short time.

"We thought we had had no impact on her at all," Mrs Wheeler said.

Then a phone call came out of the blue from Dunedin Hospital, and she was told her foster daughter was due to have a Caesarean and was "really scared".

When Mrs Wheeler went in to see her, she just said "I knew you would come".

"For me, that is really precious."

Children were put into foster care for a range of reasons, from mothers having breakdowns, to "really heartbreaking situations" that "just about breaks your heart as well".

They started taking in older children, and admitted that handling their first few was a case of "hit and miss and trial and error".

"I think for people fostering children, one of the keys that we've found over the years, is that when they arrive we give them a little teddy bear with their name on it, and make sure the spelling is right ... that means to them that that little teddy bear was waiting for them ... that becomes very precious to them as they stay here," she said.

Having a range of children around also had a positive impact on their own children, and their long-term foster children.

"For the likes of our boys, they knew from a young age how to handle children and I think they've got an advantage."

One common misconception Mrs Wheeler believed people had was that foster children were "hard done by", when really they were just the same as other children.

As a foster child, Rodger received a grant to travel to Argentina and Australia doing missionary work.

He was a William Wallace winner, an award and fund established by a foster child who put money aside for others "in the same boat", Rodger said.

This year, he helped select the winners, who were nominated by their social workers.

Although unsure how much longer they would continue to take in children, the Wheelers encouraged others to consider foster care, as it was such a rewarding experience.

"For the past five years, we've said: 'This will be the last year', but we just keep taking them in," she said.

Child Youth and Family has about 3350 foster carers in New Zealand, 170 of whom are in Otago.

Who can be a foster parent?
Anyone who can provide a stable home, is committed to making a difference in a child's life and is patient and understanding. Foster carers come from all walks of life.

What do foster parents do?
Foster parents give a child a safe, caring home, and provide for their food, shelter and clothing needs. They work with social workers, other professionals, and the child's family to get the best outcomes for the child and achieve their goals.

What support can foster parents get?
Foster parents get a range of support from Child Youth and Family including providing ongoing training, respite care, full information about a child before they arrive, and the right to say no to a placement.

Support groups are also run to allow foster parents to connect with each other.

Financial assistance is provided for the day-to-day care of foster children.

Allowances are paid for clothing, Christmas and birthdays.

How long do children live with foster parents?
There are a range of care options including emergency care, respite care for a weekend or short period, transitional of short-term care, and permanent care.

How do you become a foster parent?
Apply to Child Youth and Family to undergo the application process, which includes a police check, full medical report and personal interviews.