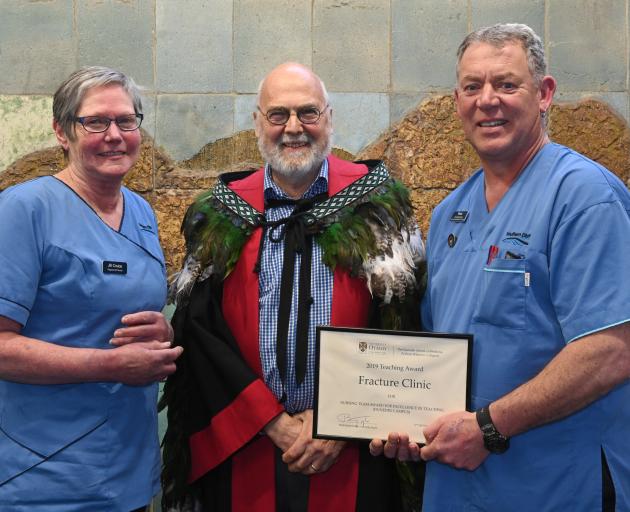 The Dunedin School of Medicine Teaching Awards, voted for by medical students, were held yesterday afternoon.

Since 2012, the popular Fracture Clinic at Dunedin Hospital has won the award five times.

There to collect it on behalf of the clinic were registered nurse Jill Cruice and enrolled nurse Ross Beaton.

Jill Cruice said in her memory, the Fracture Clinic team, which fell under the orthopaedics department of the hospital, had received the award a total of about eight or nine times.

"We must be doing something right."

Students always enjoyed learning how to apply plaster of Paris, and she thought part of the clinic's teaching success was that students got to follow up with the same patients.

Ms McCracken, a nurse practitioner, speaking via videolink about the award, said she was proud to be recognised and had learned a lot from the medical students she had hosted.

"It's been a delight having the students with us," she said.

Among the departmental winners was Dr Sam Farrimond, who posthumously won the award for psychological medicine.

Prof Taylor said she was "extremely missed" by the department.