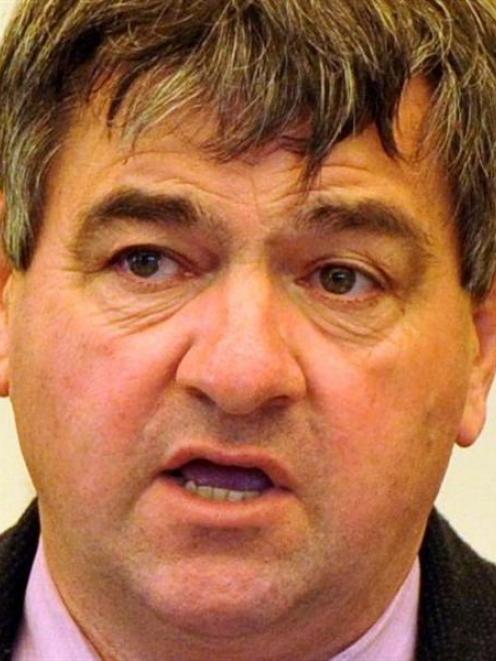 Mike Lord.
Halfway through his term as a Dunedin city councillor, Mike Lord says he is frustrated with the amount of time the council spends on ''green issues''.

Cr Lord told the Otago Daily Times yesterday he was ''a bit disillusioned'' and unsure if he would stand at the next election.

A Berwick dairy farmer who was previously Federated Farmers Otago president, he said he stood for the council under the Greater Dunedin umbrella in the 2013 local government election to try to make a difference.

A year and a-half in, he was not sure if he had achieved enough to have made that decision worthwhile.

He said he felt the council was too focused on green issues and not what was really important for the city.

''I do get frustrated with the amount of time we waste on green issues.

''I think there is still good work that can be done on council, but I just wish we would concentrate on issues of significance and importance.

''We spend too much time worrying about things that we shouldn't be, that in my opinion aren't making much difference.''

The council's decision this week to divest from fossil fuels had left him ''a bit disillusioned''.

''It's not the sort of issue in my opinion that I am there to be worrying about.''

Unlike all the other councillors under the Greater Dunedin banner, Cr Lord voted against divestment, saying his decision was about ethics.

He disagreed with the argument fossil fuels were somehow evil, saying they made a positive contribution to society.

There were important issues to be worried about.

''We have an obligation to keep our city growing, we have to be friendly to the business community, we have to front-foot things.

''We have to make sure that our city plan doesn't hinder business.''

Dunedin Mayor Dave Cull, who also stood under the Greater Dunedin banner, disputed the suggestion the council was too focused on green issues.

''It's not an either/or. Council is actually putting quite a lot of effort into a number of areas.''

Despite his frustrations, Cr Lord believed a lot of positive things were happening at the council, especially when it came to the quality of staff, ''from the CEO down''.

''We have some terrific staff, but they need guidance and, to be quite honest, dilly-dallying with a tiny percentage of the Waipori Fund is not that big an issue.''

Another issue on which he parted ways with many of his fellow councillors was the decision to strip Cr Lee Vandervis of his voting rights.

''The reason why I didn't support the motion against Lee was because I didn't agree with the punishment.

''I didn't dispute the fact that he was guilty.''

He would have happily voted to censure Cr Vandervis, but taking away his voting rights just punished the people who voted for him.

Even though he was on the opposite side to Greater Dunedin councillors on many issues, he did not have a beef with the group, saying he had never been told to vote a particular way.

Cr Lord was undecided whether he would stand again, saying it was something he would re-evaluate in about a year's time.

''What I will have to ask after three years is `have I achieved enough to make it worthwhile?'''

He was not sure what the answer to that question would be.