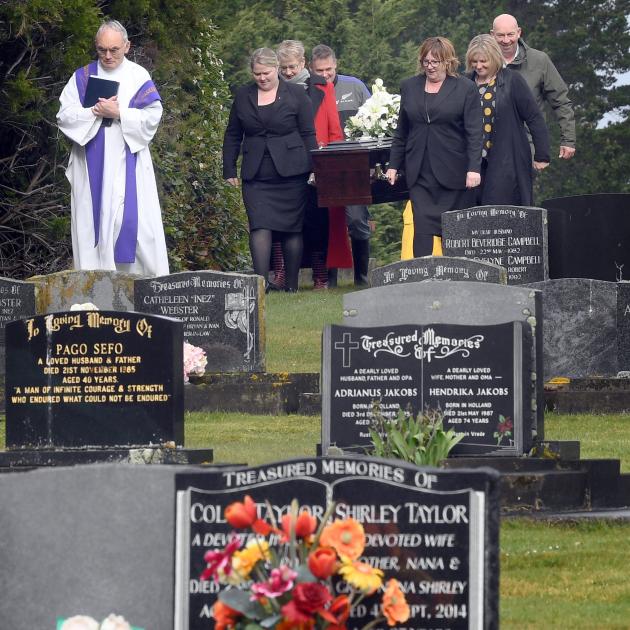 For many families, that has been and will be the reality now that Covid-19 has returned to the community in New Zealand.

Dunedin resident Keith Sellar died aged 90 at the weekend, and while his public funeral service was able to go ahead yesterday, only 100 people were able to attend.

The service, planned by Hope and Sons, was held at St Joseph’s Cathedral yesterday, followed by a burial at the Green Park Cemetery.

Mr Sellar’s daughter, Helen Wink, said she was grateful she had not had to worry about turning people away, and that the funeral directors took care of that.

"It was one added thing that I didn’t have to think about, which made it a lot easier.

"How would you pick and choose who to turn away?"

Some elderly people were nervous about attending, and many people messaged to say they felt they could not attend given pandemic situation, she said.

Her brother, who lived in London, was also unable to attend; the family would hold a memorial service when international travel was allowed again.

Mrs Wink said her father had struggled through the Level 4 lockdown and it was perhaps a "silver lining" that he would not have to cope with the possibility of that again.

If a "blessing" had to be taken from the restrictions on his funeral, it was that the family were not holding a funeral under Level 3 or 4, which many people had had to do, she said.

"That has got to be the hardest thing ... they don’t get to see their family member away in the way that they had wanted to.

"At the end of the day I was just glad that we weren’t down to only 10 people."

Until restrictions eased, it would only plan private services where families could invite up to 100 guests.

Those who were unable to attend due to the limit were able to watch the service on a livestream, which had been "valuable".

However, it was not easy to tell people they could not come into a funeral, he said.

"It is certainly distressing dealing with a death at anytime, and we [the funeral service] are so used to saying yes to everything ... doing everything to make sure families can do what they want to do to say goodbye.

"It is really difficult for us."

People had been "really amazing" and accepting of what the limitations were, and meaningful and intimate services could still be managed under Level 2 restrictions, Mr Maffey said.