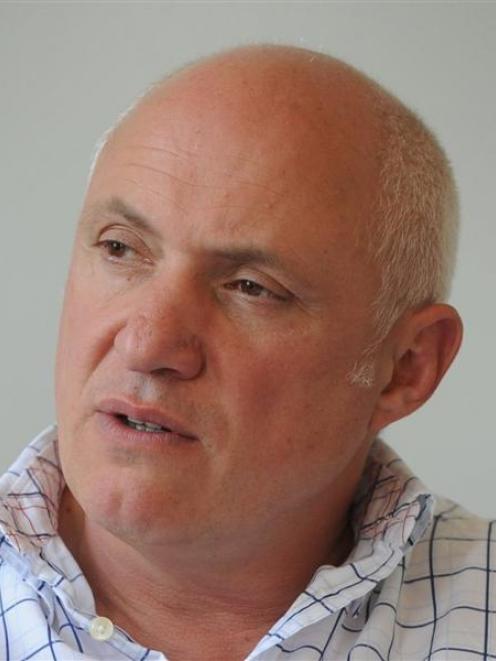 David Davies
The Forsyth Barr Stadium swallowed another $1.8 million yesterday, and the Carisbrook Stadium Trust and its consultants were labelled "either misleading or incompetent" for budgeting far less than that for the company set up to run it.

Even Dunedin Venues Management Ltd (DVML) chief executive David Davies said some of the assumptions he had heard had been made before he arrived last year had been "optimistic".

But he told the Dunedin City Council yesterday if it wanted a stadium that both had "wow factor", and would provide an income, it would have provide a $2.4 million budget.

This is $1.8 million more than planned.

After a long debate and some close votes, Mr Davies' advice was accepted by a narrow majority.

Councillors opposed to the stadium were clearly angry staff had provided them with a report that had already recommended the money come from subvention payments and "windfalls" from council companies.

Cr Kate Wilson said the report appeared to "pre-determine" what the council should decide, when it should be councillors, not staff, who decided what to do with any extra money.

Opposing councillors were, in turn, described by Cr Michael Guest as "petulant children", with a "hidden agenda" of destroying the project.

In a pointer to this year's election debate, he told them they would be judged by voters on the issue, prompting a rejoinder from Cr Dave Cull: "Bring it on".

A report on DVML, from finance and corporate support general manager Athol Stephens, said the $2.48 million for the stadium would comprise the $600,000 already earmarked in the council's budget; $850,000 transferred from the Carisbrook Stadium Trust's budget; an unbudgeted subvention receipt from the sale of council tax losses from Aurora Energy; and a special one-off Dunedin City Holdings Ltd dividend.

Another report tabled yesterday showed staff costs for DVML at $1.5 million, and administration - everything from office rentals to vehicles, marketing and uniforms - at $980,000.

Mr Davies came in for a grilling from councillors at the start of the meeting.

He said the stadium would have the "hardest of hard" openings, with the Rugby World Cup straight after it was built.

"Our belief is there is no second chance; if we get it wrong we will be forever condemned."

With the budget he had calculated, he was confident he could deliver.

Asked if there was a possibility he would have to come back for more funding, he said until issues such as the level of rates the stadium would have to pay were finally decided, and all building issues resolved, he could not make that promise.

Cr Chris Staynes said during debate about the stadium's cost, the council had told the community the budget was robust, but that did not appear to be the case with the cost of setting up DVML.

Cr Cull said the trust and its consultants had been "either misleading us, or were incompetent".

"That's the only conclusion I can draw."

Deputy mayor Syd Brown, who moved the council provide the money, argued staff had found ways to fund the company in a way that least affected ratepayers.

"If we under-resource it, we will have to take the consequences."

If the stadium was not successful in the long term, it would mean more costs for ratepayers.

A vote for the council to agree to fund the company through the various sources was won by just one vote, with Crs Bill Acklin, John Bezett, Syd Brown, Neil Collins, Guest and Mayor Peter Chin voting for, and Crs Fliss Butcher, Cull, Staynes, Teresa Stevenson and Wilson voting against.

Council finance and corporate support general manager Athol Stephens said after the meeting a subvention payment was "a transaction between two entities [companies] in the same family that optimises tax arrangements", while the one-off Dunedin City Holdings Ltd dividend came from carbon credits.

Jim Harland, chief executive of the Dunedin City Council, has pointed out that our headline, which states "Further $1.8m for stadium", did not accurately reflect the request to the council.

The difference between $2.489 million and $1.639 million is the $850,000 included in the approved Community Plan for the Carisbrook Stadium Trust which is to be transferred to Dunedin Venues Management Ltd."

The request was not made by the stadium but by DVML, which will be responsible for several city venues including Dunedin Centre, Edgar Centre and the stadium. - Editor.