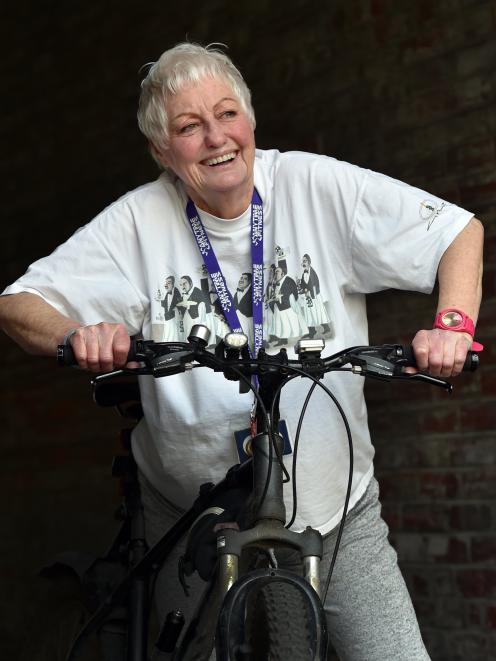 Bindi Bezar (70), of Dunedin, is ready for her 24-hour fundraising challenge in support of Alzheimer's. PHOTO: PETER MCINTOSH
Bindi Bezar will be in a purple haze next week as she pedals and walks for 24 hours in memory of her much-loved cousin who died after developing Alzheimer's.

Ms Bezar has been going to a gym "on and off" for about five years and, for the past month, has been working out "with a vengeance" to prepare herself for three eight-hour days of sustained physical activity to raise money for Alzheimer's research and treatment.

She had been wanting to do the challenge since the death of her cousin in 2014, about a month after he was diagnosed with Alzheimer's, and she did not believe being 70 was a barrier to succeeding.

The project was almost derailed a few days ago when the gym where she intended doing the 24-hour challenge decided she could not use its premises unless she had a medical certificate. And a misunderstanding about seeing a doctor for a physical examination led a tearful Ms Bezar to decide she would abandon the idea.

But a day later, another gym agreed to allow her to sign on and do the challenge at their gym without a medical certificate.

Nobody would actually be supervising her, but someone would be present throughout her three days of physical activity next Monday, Tuesday and Wednesday and people could sit with her to encourage her as she does her treadmill walking, and exercycle pedalling at the Inspiring Women Gym in Filleul St. She will be working eight hours a day for three days, taking a five to 10-minute break every hour.

She will be wearing a purple tinsel wig, a purple tutu and a purple Alzheimer's T-shirt during the venture.

Ms Bezar is adamant what she is doing is not about her - "It's all about Alzheimer's."

Alzheimers Otago is supporting the challenge and has set up a givealittle page to which people can donate if they wish.

"There is of course the message that exercise is good for the brain, and also I think Bindi is sending a positive message about ageing. She has more energy than I do," Alzheimers Otago manager Julie Butler said yesterday.

After her three-day challenge, Ms Bezar will have a day to rest before working as a volunteer collector at Countdown Mornington on September 21 - World Alzheimer's Day. The next day she will be walking in Dunedin's Memory Walk, one of many such walks being held around New Zealand in World Alzheimer's Month.