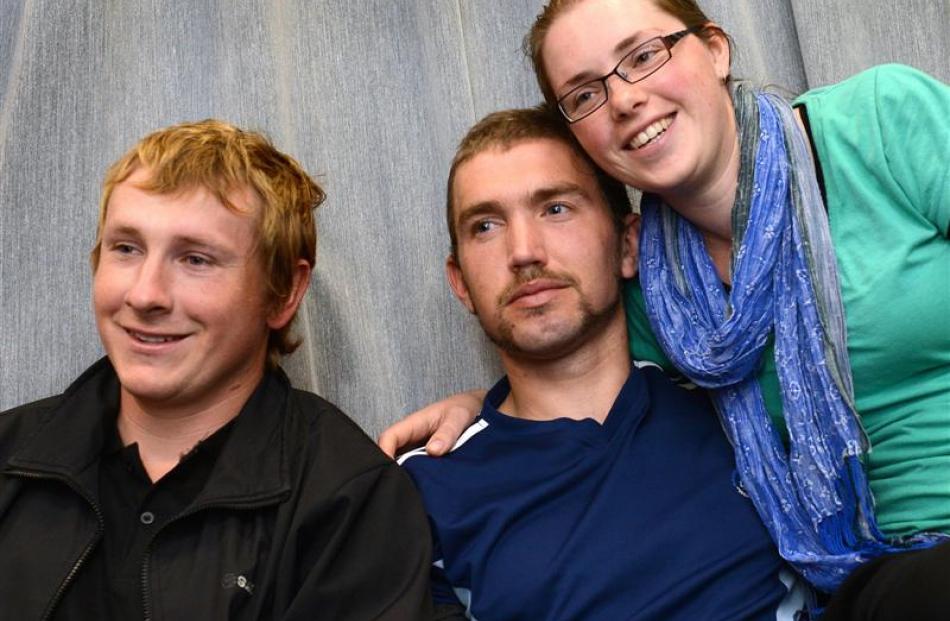 Miriam Broekhuizen embraces husband Simon in Dunedin Hospital yesterday after he and his friend Alex Anfilets (left) were rescued near Taieri Island on Wednesday. Photo by Peter McIntosh.

In the anxious hours before her husband was plucked from rough seas near Taieri Island, Miriam Broekhuizen feared she was going to end up a widow.

Her husband Simon and his friend Alex Anfilets, both of Balclutha, spent nearly four hours in the water near Taieri Mouth before being winched aboard the Otago Regional Rescue Helicopter about 5pm on Wednesday.

Had they been in the water much longer, Mrs Broekhuizen's worst fears could have been realised, as her husband's body temperature had plummeted 10degC below normal to 27degC by the time he was rescued.

At 10.30am that day, she had watched the two friends, both farm workers, set out in a twin kayak from Lake Waihola.

After kayaking down the Taieri River, they contacted her to say they were going out to sea.

Mrs Broekhuizen raised the alarm about 2pm after seeing no sign of the pair when she arrived at Taieri Mouth to collect them.

It could ''have so easily been a bad-news story''.

She kept herself distracted by focusing on their 10-month-old child. She and friends and family prayed the pair would be found.

''We just think it definitely shows there is a god out there and our prayers were answered.''

Mr Broekhuizen, whose heart went into arrhythmia as a result of hypothermia, was also thankful the rescuers found him when they did.

The pair had not planned to go out to sea, but decided to at the last minute because it looked calm.

Their kayak capsized just after they turned back to shore and, despite their best efforts at getting water out, they were unable to right the kayak.

He remembered little about his last two hours in the water as he drifted in and out of consciousness because of the hypothermia.

Asked if he felt lucky to be alive, Mr Broekhuizen said: ''It's still sinking in for me, because I was not really there for the last two hours or so.''

In retrospect, given he had only about 30 hours' experience kayaking and the type of kayak they were in, he would not have made the spur-of-the-moment decision to go out to sea.

Next time he went out kayaking, he would take more communications equipment. He would not go out to sea until he had more experience.

The rescue highlighted the importance of having a ''streamlined'' rescue service, he said.

He expected to be discharged from hospital today.

Mr Anfilets, who was not as badly affected by hypothermia and was discharged from hospital yesterday morning, recalled trying to get the attention of two fishing boats about 500m from their overturned kayak.

''We tried to give them signal, but they didn't see us.''

At one point, he attempted to swim to shore, but returned to the kayak because it became unstable in the water with only one person holding on to it.