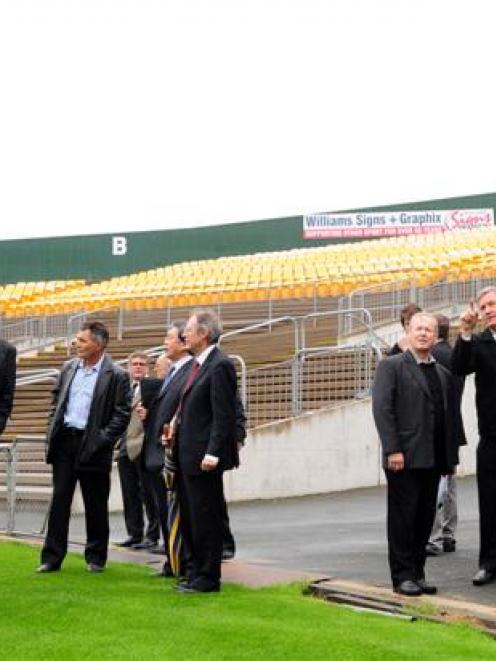 Dunedin City Council finance and corporate support general manager Athol Stephens (second from left) points out aspects of the council's recent acquisition, Carisbrook, to Cr John Bezett (left), as councillors and staff tour the facility yesterday. Photo by Craig Baxter.
Lacking only a roof, this classic fixer-upper needs TLC, but is a diamond in the rough and a handyman's special.

In popular South Dunedin, it has its own rugby field and plenty of room for first stadium buyers to install a conservatory.

While it may be too soon to know whether the Dunedin City Council plans to sell Carisbrook, councillors and staff visited the historic ground yesterday on what Mayor Peter Chin said was a "walking familiarisation tour of the various parcels of property making up the council's interest".

"There is no purpose to the visit other than to examine what, precisely, the council has bought into and now owns," he said.

"We want to have an overview of the particular possibilities there may be," he said of yesterday's visit.

"It's a discussion we've never had. We will work through it."

The council bought Carisbrook and surrounding properties last year for $7 million, with the Otago Rugby Football Union agreeing to pay a rental equal to the interest the council would pay on loans it took to buy the ground, and maintain, operate and insure the facility.

In return, the council guaranteed the interest on the union's seasonal debt for three years, up to a figure of $1.2 million.

The rugby union had used Carisbrook as security for its seasonal debt - the union's bank account was in credit in winter but in debit in summer - but that is no longer possible with the council owning the ground.