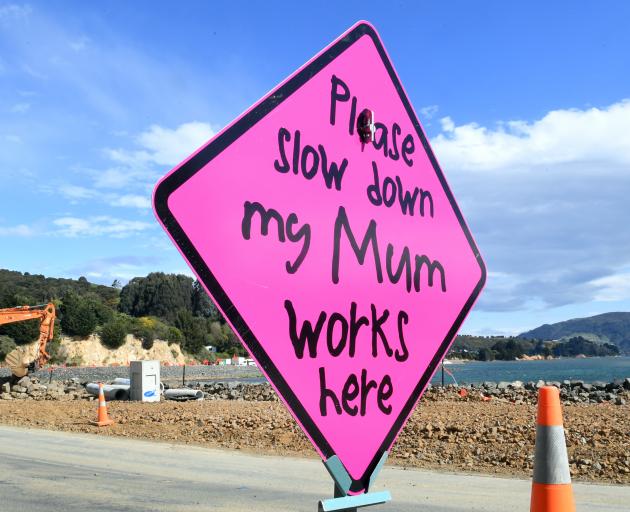 A picture of a sign asking drivers to "please slow down, my Dad works here" had attracted 14,000 hits by 10am yesterday, 18 hours after it was posted on Facebook.

The belief seemed to be that local school pupils might have been responsible for the safety messages on signs alongside the roadworks beside Edwards Bay, on the Otago Peninsula.

Two other signs yesterday had similar cautionary messages about slowing down, but they were because "my Mum" and "my Grandma" worked at the site.

Another sign mentions "my Grandad" as the person working there.

Staff contacted at both Portobello and Broad Bay Schools had heard nothing about any of their pupils creating any road safety signs.

They thought there would have "been whispers" if any pupils had been involved.

But a check with Fulton Hogan, the company carrying out the road-widening work on Portobello Rd, revealed company staff had put the signs in place and that the signs had been professionally designed.

"They are the same as ones used in Christchurch during the rebuild," a Fulton Hogan spokesman said.

The company had decided to erect the different-looking signs - in addition to the usual warnings and speed limit messages - "to grab people's attention and get them to slow down".