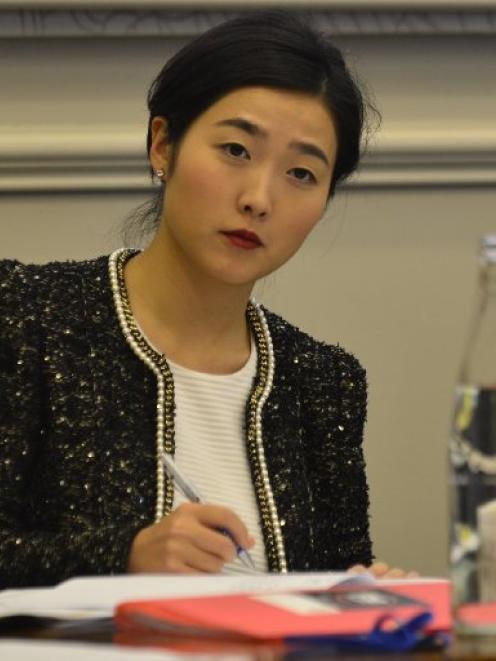 Jing Song
The woman behind the plan to build a $100 million waterfront hotel in Dunedin says the proposal is now ''a long shot''.

Betterways Advisory Ltd director Jing Song, of Queenstown, told the Otago Daily Times she was frustrated by the delays and cost involved, after spending more than $1 million so far on pursuing the project at 41 Wharf St.

She and her husband - Chinese construction company owner Ping Cao - expected to have until March to reach agreement with the Dunedin City Council in behind-the-scenes talks aimed at rescuing the project.

If the talks failed, they could pursue an Environment Court appeal, filed after the council hearings committee announced in June last year it was declining consent for the 27-storey, five-star hotel.

The appeal was on hold while Betterways and the council - with help from independent planning consultants offered by Mayor Dave Cull - considered ways to progress the project.

However, Ms Song said this week for the talks to be successful, both sides would have to agree on a way forward that addressed complex planning issues facing the project.

At the moment, there was no agreement, and Ms Song said she could now not say if one would be reached.

''We are struggling. It's a hard battle, put it this way, but it takes steps and time to resolve.

''It's a long shot, to be honest, but if it gets through all the bureaucratics and all the compliance and all the consents and the paperwork stuff, nothing holds us back to build the hotel.

''It's just getting through that part is very frustrating.''

However, ''different perspectives'' encountered during the meetings meant there had been ''a lot of working on getting common understanding about issues'', he said.

''The DCC is doing everything it can to work with Betterways to address the issues that were around the proposal.''

Ms Song would not put odds on the project proceeding, but the parties remained on ''good terms''. She still held out some hope the hotel could be built, but said the next few weeks would be ''a very critical time''.

''There's nothing really stopping building. If we don't get through where we are now [planning issues], there will be zero chance of building the hotel.

''I can't tell which way that goes. We can only do our best to try to resolve this.

''We've definitely worked very hard . . . to get crossed over the line, but it also takes the council as well.''

Ms Song was reluctant to consider other sites or a smaller building - despite earlier suggestions a compromise could be considered - saying no alternatives were on the table.

However, if the hotel did not proceed, that would not be ''the end of the story'', she said.

There were other ways of using the company's site at 41 Wharf St, although she would not say what those were yet.

''It won't be a smaller hotel ... we will look into the options for what we can do with the site.''

The company's total bill was also mounting, and now stood at more than $1 million after two years' work, she estimated.

Whether the hotel proceeded, even if approved, would depend on whether it was still financially viable once all the bills were in, she said.

The company faced the prospect of years more work - driving the bill even higher - if an agreement with the council led to a fresh consent application or another formal process, she said.

'''We're still enthusiastic and passionate about building. We could have walked away at the end of the consent [hearing] last year. We're still there and it shows how much commitment we have to Dunedin.''

In May 2012, Mr Cull said although there were consent hurdles, the council chief executive was prepared to ''run out the red carpet, not red tape, in this instance''.