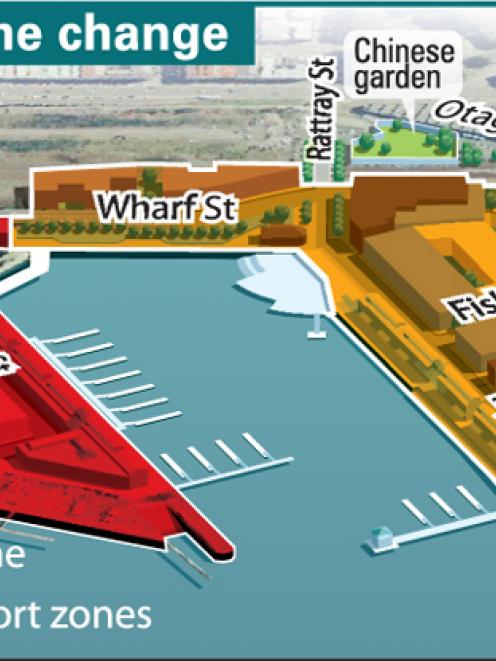 The Dunedin City Council's plan to attract cafes, bars and apartments to the harbourside area of the city has contracted to involve just one smaller area beside the Steamer Basin, after a decade's work and what is understood to be hundreds of thousands of dollars spent.

The council announced yesterday it had decided to withdraw the northern part of the controversial harbourside zone.

The zone on the southern side of the Steamer Basin would be retained to enable a mixed use environment.

The change of zoning is intended to provide a platform for developers to move in and invest in the area.

Cr Colin Weatherall, who said he had put in between 700 and 900 hours' work in the past couple of years to mediate between the council and businesses, agreed the process had cost time and money, although he could not confirm yesterday how much it had cost.

"That's the price for public consultation and democracy. It would have been a lot more expensive to do it wrong," Cr Weatherall said.

Chamber of Commerce chief executive John Christie said yesterday the cost to business and the chamber has been "tens of thousands of dollars", on specialist, including legal, advice.

On top of that was the time spent on the issue, which had been "hundreds of hours".

Discussion of the issue began as far back as 2001, but serious planning began in 2005, when the council initiated a district plan change allowing the harbourside to be redeveloped with apartments, tree-lined boulevards, bars and cafes.

It also included walkways, with the council to compulsorily acquire buildings and land under the Public Works Act to provide space.

The proposal, described as a 50-year vision, was developed by the council and Port Otago's property investment subsidiary, Chalmers Properties Ltd, which owns much of the land.

In early 2009, a district plan change was approved, following a nine-day hearing in 2008.

But in April last year, the council staved off what could have been a bitter Environment Court battle with the city's business community, when it agreed to dump much of stage 2 from the two-stage plan, and businesses agreed to accept stage 1, subject to further negotiation.

Since then, the council has agreed to withdraw the walkway designation.

Yesterday, the council announced it had withdrawn the northern part of the zone.

Then councillor and now Mayor Dave Cull came out against the harbourside plan last year.

Asked if there had been a change of attitude from the new council, elected in October last year, Mr Christie said there had, and "I think that's been helpful".

"I think the council has listened to what we have said and has acted on that."

Cr Weatherall said he was confident developers would take advantage of the opportunities in the southern area.

The wharf on that side of the basin was in good condition, and the overhead bridge provided access.

Cr Weatherall noted the council's spatial plan would be released this week, which would provide more information on the future of planning for the city.

He said there had been "a lot of changes" in the past 10 years, including the impact of the recession, which had reduced the potential for development.