By Daisy Hudson
0 Comments
Health workers and Maori and Pasifika communities are the latest groups to be tested for Covid-19 as the South racks up 18 days with no new cases and completes more than 12,500 tests.

It marked more than two weeks with no new cases in the South, which continued to have nine active cases.

Southern District Health Board medical officer of health Susan Jack said 12,519 tests were carried out for 11,554 people in the area as of Monday.

WellSouth announced yesterday its total of tests had reached 10,401, since March 18. 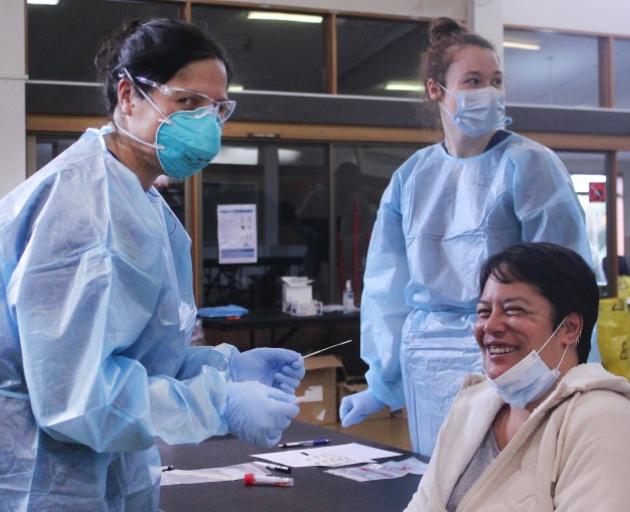 Not too bad ... Invercargill woman Maria Horsham is prepared for Covid-19 swabbing by WellSouth nurses Rachael Maheno (left) and Olivia Hall at Murihiku marae in Invercargill yesterday. PHOTO: LUISA GIRAO
Of those, more than 1500 were surveillance testing in the community of asymptomatic people.

All of the surveillance testing results received so far had been negative.

Carried out by general practices, it included targeted testing focusing on healthcare and other essential workers, Maori and Pasifika people, and those with a history of international travel.

Supermarket shoppers and backpackers in Queenstown, freezing workers in Invercargill and Oamaru, locals at marae in Bluff, Karitane, Invercargill and Dunedin, and members of the Pasifika community in Oamaru have been tested.

Testing of healthcare workers has included asymptomatic staff in Dunedin, Southland, Dunstan and Gore hospitals who have worked in areas that provided care for Covid-positive patients.

WellSouth chairman Dr Doug Hill said it was a ‘‘remarkable achievement of which the whole community should be proud’’.

“It’s been a massive undertaking but every time public health or the ministry asked us to expand our testing, WellSouth and general practice have stepped up and done the job.”

According to the SDHB, the South enjoyed rapid turnaround of test results compared with many other places.

A Covid-19 update included in the agenda for this week’s board meeting outlined how, in the early days of the outbreak, specimens had to be sent out of the district for processing.

‘‘Southern Community Laboratories, however, developed innovative solutions which brought the ability for testing to Dunedin and it also saw a different way of processing the testing, enabling a 3.5-hour turnaround from the commencement of the processing until the result was available.’’

There had been some difficulties in transporting swabs around the health board area, but those had been fixed.

Dr Jack said no new cases in the Southern region for the 18th consecutive day was pleasing.