By Daisy Hudson
0 Comments
Frustrated and stressed Dunedin pharmacists have once again been caught unawares by the latest Government Covid-19 vaccine announcement.

The Government announced a change on Tuesday to the waiting time between the second Covid-19 vaccine dose and the booster shot, reducing it from six months to four months, to provide better protection against the new Omicron variant.

But a lack of clarity during the media announcement about when that change would begin meant people swamped Dunedin pharmacies to try to get their third jab.

Antidote Meridian Mall owner Lorealle Lam said people had started coming into the pharmacy for their booster as soon as the announcement happened, and staff had been abused by some customers when they had to turn them away.

A similar situation occurred when the Government advised people to go into pharmacies for help getting a vaccine pass, which caught many pharmacies unaware.

"They keep doing this to community pharmacies," she said.

"The 1pm announcements are what I fear the most."

Often, customers were advising staff of announcements before they were officially told by the ministry, she said.

She urged people to be kind to staff, who were doing the best they could under the circumstances.

Roslyn Pharmacy director Andrew Hou said a lot of people had come in wanting their booster, especially in the lead-up to holiday travel.

The communication about the change had not been clear enough, he said. 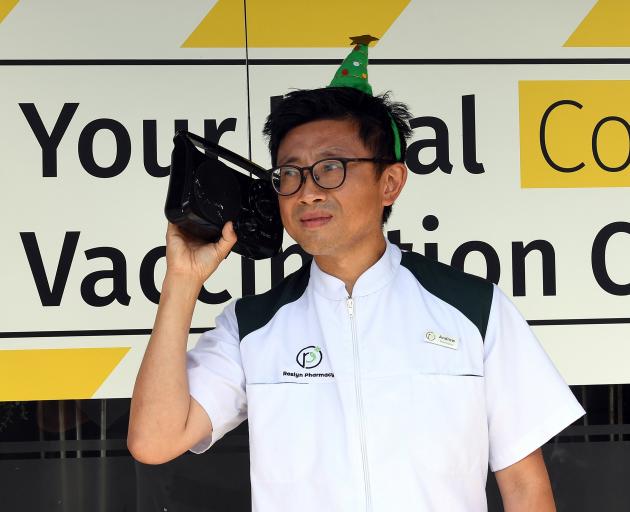 Roslyn Pharmacy director Andrew Hou listens to a Covid-19 update, which is where pharmacies learn new information, at the same time as the rest of the public. PHOTO: STEPHEN JAQUIERY
"Every time there’s that 1pm press briefing, we all sit there with bated breath," he said.

"We understand it’s an extremely fluid situation and things change at the drop of a hat, but we’re told as soon as the public are told so it does make it a bit tricky."

Macandrew Bay resident Chris Hewitt was one of those turned away at the Meridian Mall vaccination centre yesterday morning.

After seeing the Government’s announcement, and being five months past his second vaccination, he thought he would be able to get his booster.

He was told he could not get it without a doctor’s permission until after early January.

He said the situation was ridiculous.

Several other people were also turned away while he was there.

The Ministry of Health did not respond to a request for comment yesterday on pharmacists’ concerns over lack of communication.

Instead, it issued a statement.

"For people who have already reached the four-month mark since their second vaccination following yesterday’s announcement, they will be able to walk into any clinic from January 5 without a booking and be vaccinated, or can choose to wait until January 17 if they prefer to book.

"This period will allow for the necessary operational changes to be made by the ministry ahead of these key dates," the statement said.