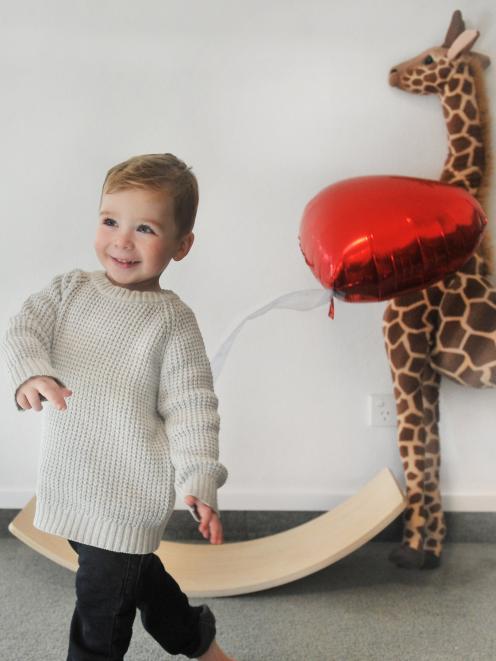 That could seem unremarkable, but for a 2-year-old in and out of hospital for most of his life, it is no small achievement.

The day Ali was born, he was one of an average of 12 children born each week with a congenital heart defect.

There is neither prevention nor cure for such defects, which affect 1 in every 100 births and are the main cause of death in babies and newborns.

Ali’s mother, Rebecca Wilkinson, said she and her husband, Anthony, noticed her son had breathing difficulties when he was a month old.

"Our 3-year-old, Asher, was a very happy, contented boy, he was a breeze, so Ali being so distressed was new to us. We had to hold him practically 24 hours a day.

"The only way he would not be distressed was to be held."

Doctors almost immediately diagnosed Ali with laryngomalacia (softening of the tissues of the larynx above the vocal cords), but it was not until many months later that his congenital heart defect was detected.

"He just never got better. He was always distressed, he was always unhappy and his breathing sounded just like Darth Vader," Mrs Wilkinson said.

"We used to refer to him as ‘our little tractor’.

"In February a barium swallow was carried out to allow doctors to see the top of Ali’s bowel and the radiologist booked to carry it out said she thought Ali had a vascular ring — a lesion blocking this throat."

Ali’s lesion was due to his heart defect and the lesion was growing from his aorta.

"He still needed a CT scan to formally diagnose what type but we felt validated because we knew there was something wrong with Ali."

At this point, Heart Kids, a not-for-profit organisation which supports children with heart defects and supports their families, entered the Wilkinsons’ lives.

"They came to visit and it was like this big warm hug," Mrs Wilkinson said.

"Having a service like that in our home and working alongside us, not in a medical capacity but to give us support, was just incredible for us."

This week is Heart Kids’ Awareness Week and the organisation is seeking donations to continue its work.

Once diagnosed, Ali was operated on at Starship almost immediately.

"Having help from Heart Kids was invaluable because they told us what to expect and how we could prepare for something quite daunting."

Successful surgery had lifted the dark clouds over Ali and brought light back to the family again, Mrs Wilkinson said.

"He is still not out of the woods, he still has laryngomalacia, and we still have to take very good care of him," she said.

"But he is very full-on and was very well very quickly afterwards ... it’s like day and night.

"He’s a completely different boy now, and he’s going to have the childhood he deserves."