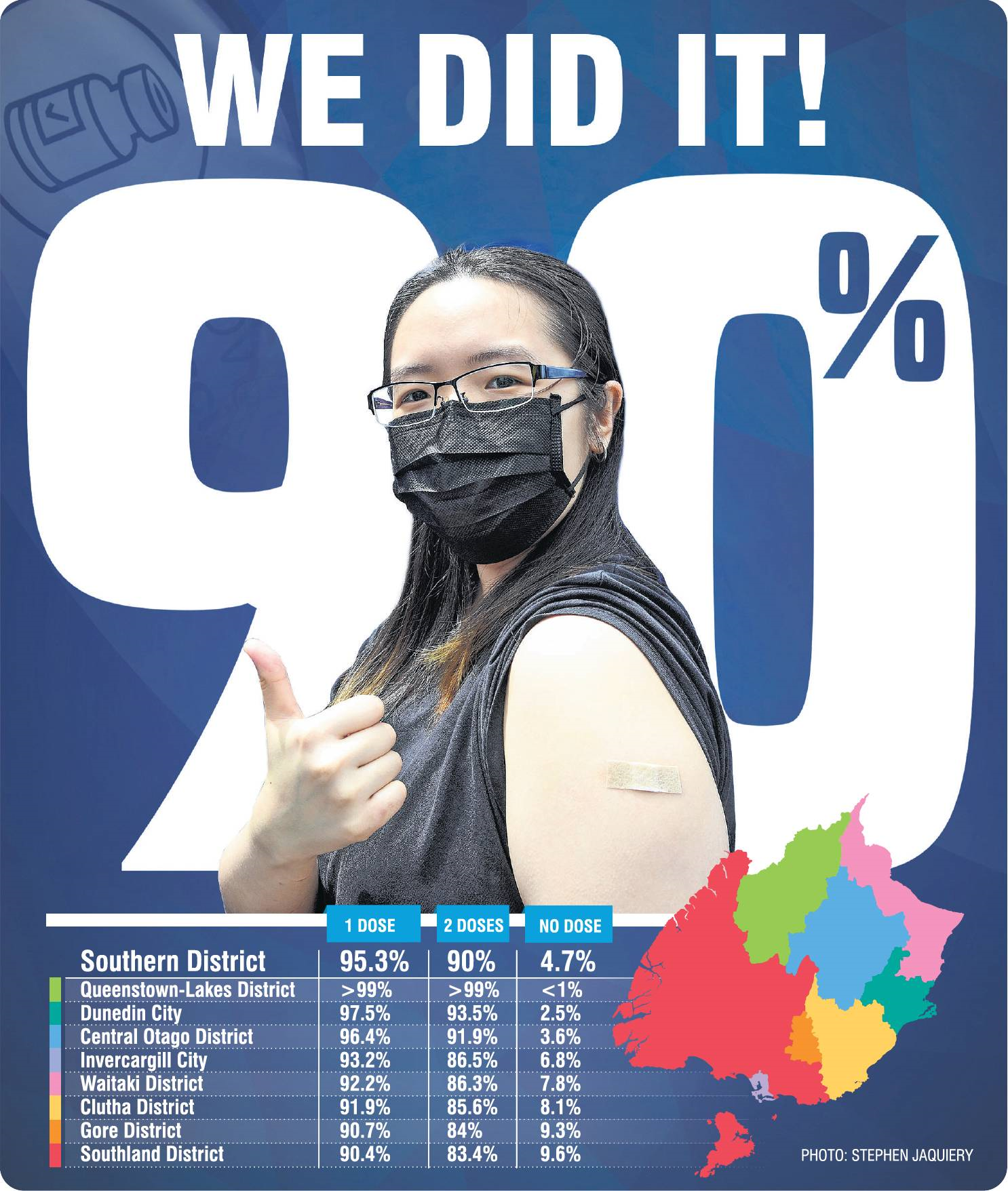 There were celebrations in the South yesterday as the region cracked the Covid-19 90% double vaccination milestone.

The Southern District Health Board yesterday became the fifth health board in New Zealand, and the second in the South Island, to reach the figure.

It may have come just in time, as the Ministry of Health reported a border case in the region was under investigation.

"This person returned an initial weak positive test and a second test has returned a negative result," a ministry spokeswoman said.

The ministry said "out of an abundance of caution" it would publish one location of interest: the Department of Conservation Green Lake Hut in Fiordland National Park, from 7pm on Saturday to 8am on Sunday.

The person consistently tested negative during their managed isolation stay, returned a weak positive from a swab taken on Monday, and a negative retest result yesterday, the ministry said.

If the investigation found the case was historical, the location would be removed and the contacts could be released from isolation.

A Doc spokesman said the hut slept 12, but because it did not go through a booking system, it was not known how many people accessed the hut during the period of interest.

The Otago Daily Times understands there were 14 people staying in the hut at the time.

Doc was following ministry guidance on whether the hut needed to be deep cleaned or closed, and at this stage it remained open.

All of Southern’s local authorities had now also reached the 90% mark for eligible people having received their first dose, and three - Dunedin, Queenstown-Lakes, and Central Otago - had reached 90% double vaccinated.

About 87% of southern Maori had received their first dose, ahead of the national rate.

"While the district may be at 90%, there are still pockets with low levels of vaccinations, and it is these communities that are particularly at risk in a local outbreak.

"These include some of our more rural areas and Maori populations."

Southland Mayor Gary Tong said he was pleased with the news.

"It’s pretty significant. I think people have picked up that they need to be vaccinated to protect themselves and those around them. I’m just so happy that we’ve reached that milestone."

Although the region as a whole had reached 90%, Southland district was sitting at 83.4% double vaccinated.

Nationally, 88% of the eligible population is fully vaccinated.

One of those getting the jab yesterday was University of Otago student Perry Hee who got her second dose at Unichem Knox Pharmacy in Dunedin.

She said she got vaccinated to protect herself and the community, and was pleased to see the 90% milestone reached.

Dunedin Mayor Aaron Hawkins said that it was inevitable there would be some community transmission in the South, and it was important to have as many people as possible vaccinated before that happened.

University of Otago epidemiologist Prof Michael Baker said reaching 90% was good, but the higher the vaccination rate, the better.

The difference was the seriousness of the effect of the virus on the infected person, he said.

Countries such as Portugal and Singapore were reaching 98% fully vaccinated, and he believed that that was attainable in New Zealand as well.