'We're sorry' doesn't cut it when you need surgery

Her treatment was botched and the handling of her subsequent complaint about that labelled ''unacceptable''.

However, once again, Dunedin bladder cancer patient Andrea Woodford finds herself facing delays to receive critical tests, and a wait for an urgent but so far unscheduled operation.

Ms Woodford is ''Patient D'' in a scathing report by the health and disability commissioner into the urology service provided by the Southern District Health Board.

The report, released on Monday, said delays in Ms Woodford's treatment were a ''significant departure from the expected standard of care'' and that the SDHB's inadequate handling of her complaint treated her unfairly. 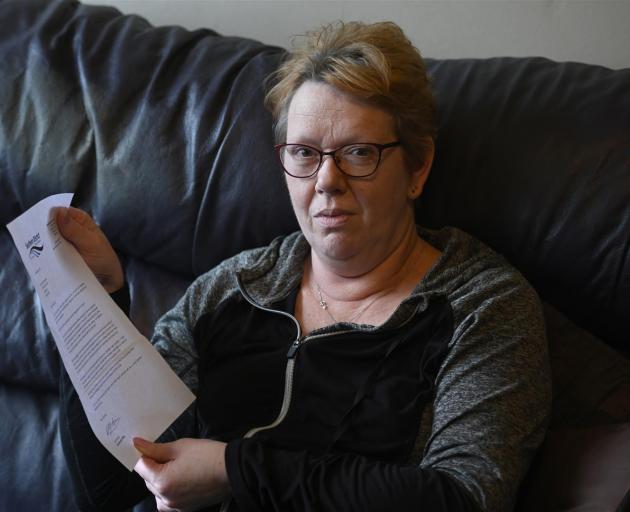 Dunedin bladder cancer patient Andrea Woodford holds a letter of apology sent to her by the Southern District Health Board. Photo: Linda Robertson
That included an invitation for Ms Woodford to meet a service manager to discuss her case: after multiple unsuccessful attempts to contact him, she discovered the man was no longer employed as a service manager.

The health and disability commissioner's report vindicated her after a two-year battle, but Ms Woodford still has to deal with the realities of cancer.

She cannot work due to severe pain and incontinence issues; on Friday Ms Woodford will spend her 50th birthday at an appointment with an anaesthetist to discuss an important operation necessary after a test she said was long overdue was finally performed last week.

''Last Monday they found four more tumours in my bladder and I asked my doctor how long is this going to take?'' Ms Woodford said.

''He said it could be anywhere between six and eight weeks; I know it is really urgent, but I can't do anything about it.

''They rang me up and they apologised but I thought, 'shouldn't I be top of the list because of my circumstances?' ... they can write all this stuff on paper but it hasn't really stopped it.''

Ms Woodford has heard plenty of apologies from the SDHB, to the point where where she has dismissed as ''just words'' the one the SDHB wrote her following the commissioner's findings.

''The whole thing has left me exhausted, but I don't want anyone else to go through what I have had to go through.

''If they would just listen to people when they say there is something really, really wrong with them, it shouldn't have gone so far for so long ... this will be my fourth operation, but no-one tells you anything.''

The report was instigated by commissioner Anthony Hill after 38 complaints were received about the SDHB urology service in a matter of months.

He found that the service was too slow to react to a looming crisis of overdue procedures, and the SHDB's process for handling complaints was insufficient.

In Ms Woodford's case, SDHB chief executive Chris Fleming told Mr Hill the management of her complaint was ''totally unacceptable'' and that he intended to use it as a ''paradigm case'' with his team.

''I am meant to be getting a cystoscopy every two months. If I had had it four months ago, maybe they would have caught it, maybe not, but surely there is something more they can do.''

but with a condition that left her in near constant pain, needing always to be near a toilet, and requiring frequent surgical procedures, her dream could not be realised.

''I can't get a job or anything. Doing things is hard. You have this constant pain in your back, and you are always wanting to go to the toilet but when you sit there you can't,'' she said.

''There is nothing you can do but catheterise yourself, and that is very hard to master. It takes a toll on you.''

SDHB chief executive Chris Fleming said Ms Woodford's comments would be passed on to the urology service, but he could not comment on individual cases.

On Monday, Mr Fleming ''unreservedly'' apologised for the failings which led to unacceptable care being provided to patients in the SDHB urology service.