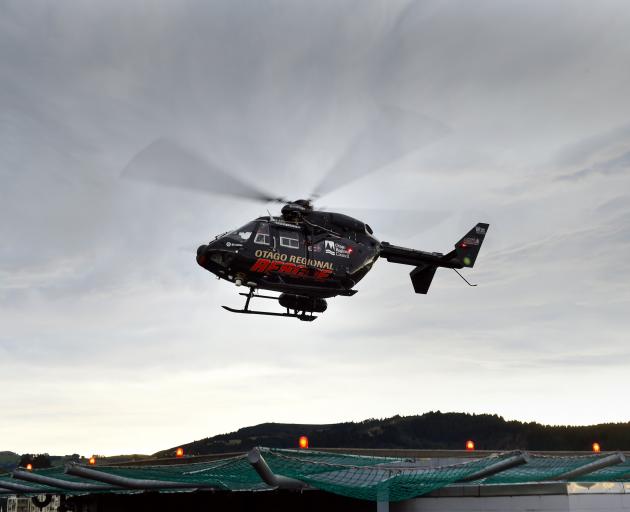 The Otago Regional Rescue Helicopter lifts off from the Dunedin Hospital helipad. PHOTO: GREGOR RICHARDSON
"Frustration and uncertainty" loom over the contract for emergency helicopters in the lower South Island as callouts for the service spike.

The trust was contracted for emergency services for much of the lower South Island, with Mosgiel-based Helicopters Otago as its provider.

The Ministry of Health now wants to deal with contractors directly and seeks one contract for the entire South Island.

The new contract is supposed to be operational from November 1.

Trust chairman Ross Black said Helicopters Otago managing director Graeme Gale was "very worried" as there was "no sufficient insight" into where the contract was heading.

"I can read his body language. He's very worried about the challenge that lies ahead of him to have the new service up and running from November 1."

There was "frustration" over the uncertainty, he said.

Mr Gale was unable to speak about the bid.

The previous five-year contract ended in March, but the ministry extended it until November.

The new contract would involve an increase in the company's operations including a "dedicated machine" in Queenstown, Mr Black said.

The trust's report showed 1023 emergency patient retrievals in the year to June, up 34% on the previous year's count of 765.

Mr Black said one reason was because of the new "clinical pathways" through which patients showing symptoms of certain conditions would be taken straight to Christchurch Hospital, rather than somewhere more local.

There was also a "quite dramatic" increase in the number of tourists, he said.

The increase was not necessarily a negative as it was evidence of the availability of a "highly competent service", he said.

A ministry spokesman said it was working through negotiations and expected to make the first of a series of announcements about the contracts later this month.

"The ministry appreciates the efforts by services to continue operating as usual during the time taken by the tender process and negotiations."