Help for gas works a 'no-brainer' 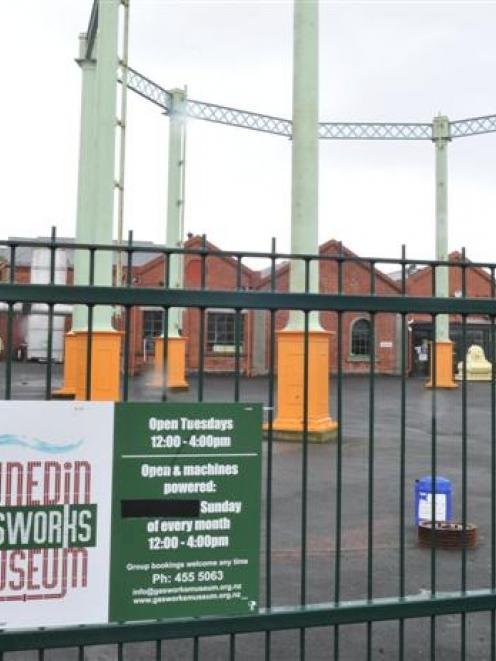 Dunedin's Gasworks Museum. Photo by Craig Baxter.
The Dunedin City Council has authorised a $100,000 emergency loan and will seek expert advice to tackle mounting concern over the deteriorating condition of the Dunedin Gasworks Museum.

The moves came as some councillors warned the financial support would be only the start of much larger spending on the facility, while others said the council risked being labelled ''hypocritical'' if it did not save the buildings.

Council city property manager Robert Clark also warned councillors yesterday that without strengthening, the historic gasworks' chimney and one of its main buildings were both expected to collapse should there be a significant earthquake.

The comments followed a public submission from the museum trust board members last week, calling for extra council funding, and figures from Mr Clark earlier this week showing $2.5 million was needed to protect the facility.

In response, councillors at yesterday's 2013-14 draft annual plan meeting agreed to spend an extra $50,000 on a new study that would provide more detail later this year on the exact condition of the complex, as well as the extent of repairs required.

In the meantime, councillors also voted to approve an interest-free council loan to the trust, of up to $100,000, to pay for the repair or replacement of the museum's boiler, which recently failed its certification.

The loan was expected to be repaid over three years, but details would be confirmed in discussions between the trust and council staff, council chief executive Paul Orders said.

Most councillors spoke in support of the measures yesterday, saying the council needed to protect the buildings but should begin with a detailed study of the work required.

Cr Colin Weatherall reminded councillors the complex was the only remaining operational gasworks in the world.

The council also risked being labelled ''hypocritical'' if it was prepared to ask other heritage building owners to upgrade their properties, but was not prepared to look after its own, Cr Jinty MacTavish said.

Cr Andrew Noone said the trust had already ''done a heck of a lot for themselves'', and the council needed to support the facility.

The study would be the first step any responsible building owner would take, he said.

''We really do have to maintain those buildings.''

''They are in a bad state of repair and it's going to cost a substantial amount of money to repair them, so this is just the start.''

Cr Kate Wilson also supported the spending but warned that, without Government help, the council would not be able to save every heritage building in the city, and would face hard choices in the future.

Mayor Dave Cull said that was right, ''but we own this one''.

The ''embarrassment'' the council would face if it failed to protect its own heritage buildings ''doesn't bear thinking about, frankly'', he said.

''It's one of the major attractions for any visitor ...going to see an old steam engine that's not moving really isn't edifying for most people.''

Mr Clark, speaking earlier, said it was not yet clear exactly what the boiler would cost to repair or replace, but the request for help was ''an urgent issue'' for the museum.

The museum's chimney - which had leaned since it was built - was nevertheless also at risk of collapse, and needed brick repairs and new iron bands, among other work.

Asked by Cr Lee Vandervis where it would land if it fell, Mr Clark said that was not clear.

However, the most significant concern surrounded the complex's main two-storey building beyond the engine house, which was also at risk of collapse.