Helping those stricken at sea 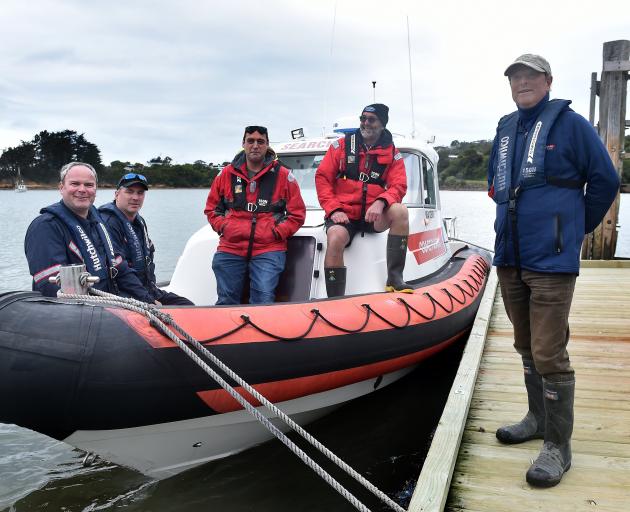 Coastguard Dunedin president John Campbell (right) with other members (from left) Scott Turner, Barry Harwood, Tea Gilbert and Mac McDonald, are among volunteers who operate Dunedin Rescue, an 8.5m Protector, out of the Broad Bay Boating Club.PHOTOS: PETER MCINTOSH
By land, air or sea, groups of willing volunteers are on stand-by in the South - ready to lend a helping hand to those most in need. In the first of a series, reporter Chris Morris talks to Coastguard Dunedin.

Coastguard Dunedin’s only rescue boat, Dunedin Rescue, is considered something of an ageing workhorse.

But when an Otago Daily Times reporter takes the wheel and gingerly pushes the throttle forward, it roars into life.

The boat hums along at 25 knots — or 46kmh — as it skims over a flat, following sea on Otago Harbour.

It is cruising speed, as the ageing Protector is still able to reach speeds nearly double that, if needed.

Bouncing along inside the perspex cabin, sheltering from a cold southerly, is Coastguard Dunedin president John Campbell and four other members of the maritime rescue service.

The grinning, joking group take turns at the wheel and other roles, honing their skills during weekly training sessions.

All are volunteers willing to give up their time to help those in need, on the harbour or in rougher waters off the Otago coast.

And demand for their services was only going up, as the harbour became more accessible to more people, Mr Campbell said.

Coastguard Dunedin boat Dunedin Rescue at Broad Bay on Otago Harbour.
The service dealt with between 15 and 30 rescues each year — most during summer — as well as false alarms, which the volunteers were happy to treat as training opportunities.

Kayakers who tipped out were also a common callout reason, as were fishing boats without power and in need of a tow.

The kind of "dangerous" southerly blast which struck last week also kept the crews busy retrieving boats driven on to rocks or as they dragged their moorings.

Unfortunately, the role also included responding to tragedies such as the fisherman who died after being swept off rocks by a rogue wave at Cape Saunders, just days before Christmas.

All of the incidents were attended to by some of the 33 volunteers on call for Coastguard Dunedin. 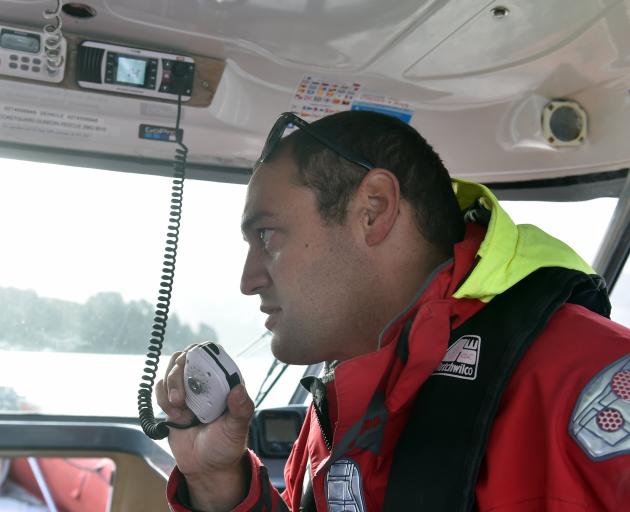 Coastguard Dunedin volunteer Tea Gilbert is a new member and still learning the ropes, guided by the more experienced volunteers around him.
The service relied on funding from the Government and the Lottery Grants Board, as well as fundraising efforts and police callout fees.

The national coastguard service was extended to include Dunedin in 2006, building on the earlier efforts of marine search and rescue volunteers in the city.

That followed the Time Out boating tragedy in 2003, in which three men drowned off the North Otago coast, which was "a bit of a wake-up call for just about the whole search and rescue industry", he said.

In 2012, the service swapped its first boat for its current 8.5m Protector following a fundraising campaign, but another upgrade was on the way in 2021.

A fleet of support boats being built for the upcoming America’s Cup in Auckland were to be given to coastguard units across the country, and Dunedin was in line to receive a larger 12.5m Protector.

In the meantime, volunteers had a little less than two years to find a home for it, as the unit’s existing boat was stored on a trailer at Portobello and launched at Broad Bay when needed.

The unit had been exploring ideas for a dedicated facility as part of planned upgrades of the Portobello and Broad Bay boating club facilities, but neither would be suitable for the larger boat, he said.

Instead, Coastguard Dunedin had teamed up with Lifesaving NZ and Dunedin’s Marine SAR and LandSAR organisations, to explore the potential for a new shared facility somewhere in the upper harbour.

A recruitment drive was also about to start to find new volunteers living or working in the city, to boost response times in an emergency, he said.

An open day was planned for February 22 at the Otago Yacht Club, he said.

Training and qualifications were offered, not to mention the enjoyment of getting on the water and the benefits of helping those in need.

Or, as Mr Campbell put it: "Feeling good and doing good."