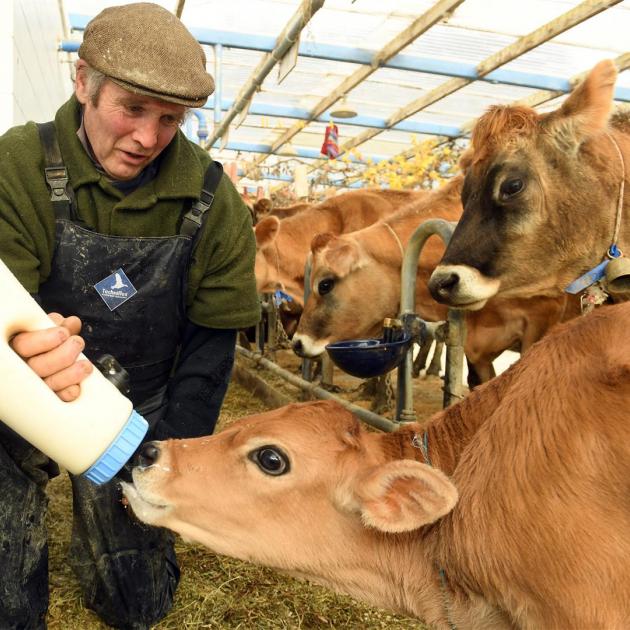 Port Chalmers dairy farmer Merrall MacNeille was distraught when he booked his beloved cows for slaughter a year ago, after a heifer tested positive for tuberculosis and he was ordered to stop selling raw milk.

He later changed his mind and decided to keep his herd, even though there was no financial return from them.

Now Mr MacNeille and his wife Alex are awaiting sign-off from the Ministry of Primary Industries which will allow them to sell pasteurised milk.

As his cows strolled back to their scenic paddock above Careys Bay yesterday, he said the good part of their situation had been all the people who had helped them.

When Nina - who was not part of the milking herd - tested positive for Tb and had to be slaughtered, the couple faced potentially a six-year delay before they were able to sell raw milk again.

Unable to sleep, he started running through the list of names of his cows and it was at that point he decided he was going to keep all of them.

News of the couple's plight quickly spread and they were inundated with support, including financial assistance.

The money went towards feeding the cows last winter and also the building and equipment requirements to meet MPI standards when the couple decided to switch to producing pasteurised milk.

As they worked towards meeting those requirements, their worthless milk was used to feed calves, which had grown ''beautifully''.

Mr MacNeille had been selling raw milk from the farm since 2003 and had hundreds of customers, many of whom had been eagerly awaiting the return of Holy Cow milk bottles.

''It seems like every week someone is dropping in saying 'when are you going to have milk again?' It's been continuous.''

He had been drinking the pasteurised milk for a month or two and he reckoned it was ''pretty good''.

''It's a little different but it's not so different I don't feel comfortable drinking it myself. The texture's fine, the flavour's good, it's pretty much the same milk,'' he said.

Mr MacNeille was only milking 11 cows at present and it was unlikely they would produce enough milk to meet demand when sales started.

But come spring he would be at the Farmers Market, with production in full swing, and it was also planned to introduce additional dairy products over time.