Hopes up for beleaguered bird 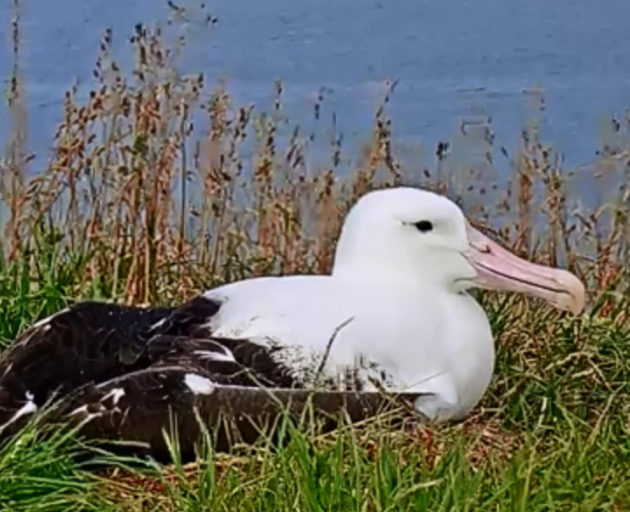 Photo: Supplied
Dedicated watchers of Dunedin’s albatross colony, through the Royal Cam live stream, were relieved to see the return of one famous bird following his month-long disappearance.

The northern royal albatross, known as OGK and father of this year’s Royal Cam chick, returned to his family at Taiaroa Head on Tuesday.

However, the live stream showed he had an injured leg and was struggling to feed his chick.

And the family reunion would be short-lived.

After searching the headland, it appeared he had flown off to sea again.

Ms Barker said despite concerns, it had been a good sign that he could place weight on the injured leg and take off.

"We are hoping the leg injury is superficial, as it is not unheard of for leg injuries to mend naturally on their own."

She was confident they would know when OGK returned.

A global audience, including rangers, was keeping a constant eye on the colony through the live stream, which had been set up by Doc in 2016.

Ms Barker said the purpose of the live stream had been to share the colony’s story with the world, and along with becoming an online "sensation", the albatrosses built a supportive international community who were invested in their wellbeing.

Doc wildlife ranger Sharyn Broni said while albatross chicks relied on both parents to feed them, the Royal Cam chick had been regularly fed by her mother, banded YRK, while her father had been away.

"If parents are absent for several weeks, Doc rangers would normally monitor the chick’s weight and supplementary feed it if necessary."

She said Doc had been working through what the implications of moving to Alert Level 3 would be on its work programmes.