By Grant Miller
2 Comments
The entire site secured for Dunedin’s new hospital could be cleared for the development by June.

The Ministry of Health was granted a resource consent yesterday to demolish buildings — including heritage facades — at the old Cadbury factory in Cumberland St.

Granting of the consent places the demolition part of the hospital project well ahead of schedule.

New Dunedin Hospital programme director Mike Barns said resolving the issue quickly — effectively with the agreement of parties that had been opposed — was a major step.

Demolition crews are close to completing work at the former Wilson Parking building, site of a hospital outpatients building.

"Demolition of the outpatients building site is on track for completion by Christmas, and having now secured this consent, the entire hospital site is expected to be cleared by June next year," Mr Barns said.

It had previously been estimated demolition might be completed in February 2022.

In granting the consent for where the inpatients building would be constructed, hearing commissioner Gary Rae had to be convinced the probability of the hospital being built at the central city site was high. 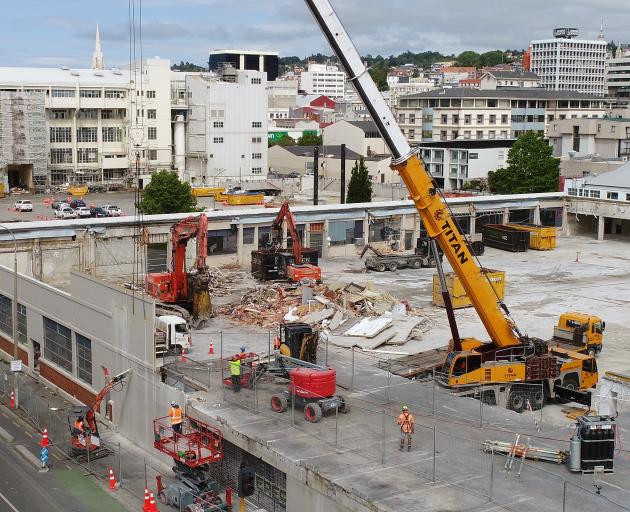 A crane is used to remove part of the former Wilson Parking building, which is being demolished to make way for Dunedin’s new hospital development. PHOTO: STEPHEN JAQUIERY
Mr Rae concluded it was, and losing Cumberland St heritage facades was unavoidable.

He said the hospital would bring significant benefits to the community.

However, some parts of the hospital project have not been sailing along quite so smoothly.

It is set to exceed its $1.4billion budget and the Cabinet is yet to approve a detailed business case. The Cabinet has signed off on the case in principle.

New Dunedin Hospital project chairman Pete Hodgson said a quantitative risk analysis could not be completed in time for consideration by the Cabinet in September and a complete concept design was now almost ready to be signed off.

"Those gaps are being rapidly filled," he said.

Mr Hodgson said he was delighted the demolition consent had been granted.

Mr Barns said he was well aware of concerns about heritage at the site being lost.

"We’re taking every step we reasonably can to mitigate these," he said.

That included keeping a photographic and video record of the factory buildings.

Heritage New Zealand Otago-Southland manager Jane Macknight said the buildings were a tangible link to the site’s history of land use, including as a brewery, distillery and confectioner.

Heritage New Zealand required the retention of the Dairy and Machine House building at the site to mitigate against the loss of heritage, she said.

In the end, no parties were actively opposed to the ministry’s application for demolition and they agreed on a set of conditions.

The ministry will have to submit a demolition management plan and a plan for removing asbestos.

It will have to make sure there are no adverse effects on the structural integrity or heritage values of surrounding heritage buildings — particularly the machine house building and the Allied Press building.

Allied Press — publisher of the Otago Daily Times — withdrew its opposition to the application before the November 2 hearing.

The ministry will need to take steps to minimise noise and vibration during demolition, as well as manage traffic and control dust.

Allied Press had earlier raised concerns about the potential for dust and vibration to affect the printing press.

The demolition consent period is for five years.

Some materials may be salvaged to retain items of heritage.

Knocking things over is the easy bit. Building a well designed hospital, to become the most modern in New Zealand, that is fit for purpose, including accessabilty and adequate parking is quite another story. As for the budget? I think we all knew, right from the start........nothing goes to budget. Forget about the money, just do the right thing. Nothing is more important than public health. Nothing else can function without our health. Just do us the justice in making a good job of the build. Please.......don't just put a Bandaid on a broken limb.

Bring in a explosives demolition team from America those hideous buildings would be gone in a month.