Inscription one of five known 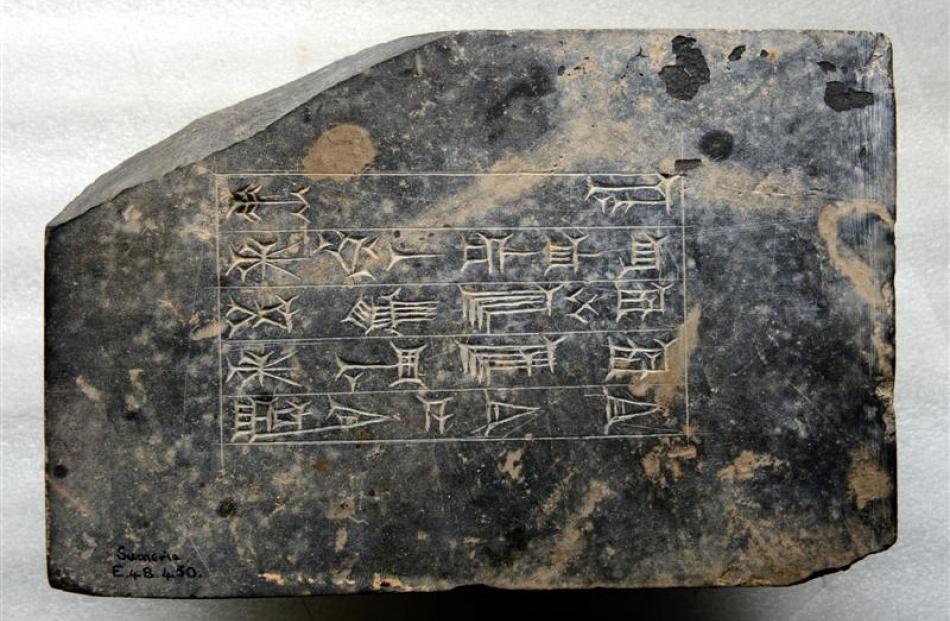 This ancient stone inscription at the Otago Museum is one of only five of its kind known throughout the world. Photo by Gerard O'Brien.

Otago Museum staff long suspected that an ancient cuneiform inscription in a polished brick-like rock in their collection was something special.

But it was only after assyriologist Prof Wayne Horowitz, of Jerusalem, visited the museum in 2013 and made a careful study, that the truth about this 3500-year-old inscription has become known.

And the museum now realises that it is home to one of only five known cuneiform inscriptions linked to Hasmar-Galsu, a ruler in the ancient Sumerian civilisation, in the ancient equivalent of southern Iraq.

The Otago Museum is in distinguished international company.

The dedicatory inscription on the piece is the same as on the other inscriptions of Hasmar-Galu, housed at the Oriental Institute of the University of Chicago, the collections of Yale University and the Metropolitan Museum of Art, all in the United States.

Assyriologists Prof Horowitz and Peter Zilberg, of the Hebrew University in Jerusalem, and Dr Larry Stillman, of Monash University in Melbourne, undertook the translation of the Otago artefact's text.

Museum humanities curator Moira White said the ''translation and finding of this royal inscription'' by Prof Horowitz was ''very exciting''.

She had been surprised that this inscription ''should be quite so rare''.

The outcome was ''absolutely fantastic'' and the discovery would ''raise the profile of the museum's Near Eastern collection internationally'', she said.

''It obviously adds to the information we have about our collection,'' Ms White said.

This stone inscription and many other cuneiform inscriptions on clay tablets had been given to the museum by the late Dr Lindsay Rogers, a University of Otago graduate who served in the Royal Army Medical Corps during World War 2.

He later worked as professor of surgery at the University of Baghdad, for five years after the war. This stone inscription was registered at the museum in 1948.

Prof Horowitz has said that only five inscriptions of Hasmar-Galsu were known, all written on the same black diorite stone.

Three of the examples, including the piece at the Otago Museum, gave the same dedicatory inscription for reconstruction work conducted on behalf of Hasmar-Galsu at the temple of the King of the Gods, Enlil, at his most important temple, the Ekur, in his holy city of Nippur, he said.

The Otago Museum has about 150 cuneiform tablets and inscriptions, the largest known collection of its kind in the southern hemisphere.