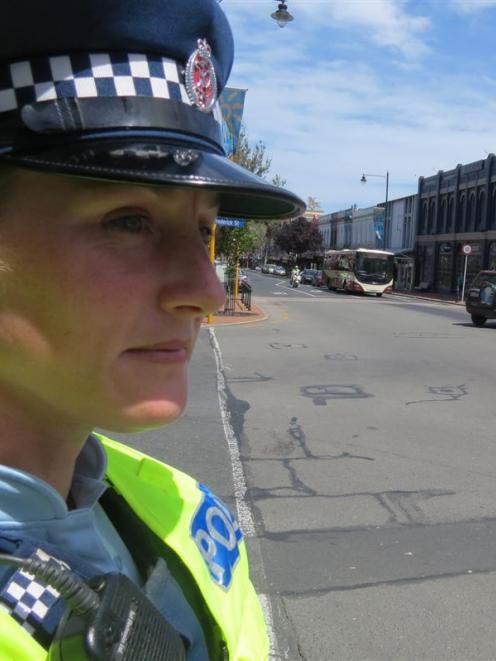 Constable Emily Plew surveys the five-way intersection on George St. Photo by Jonathan Chilton-Towle.
Dunedin drivers need to improve their behaviour at intersections, which are the site of more than a third of all road accidents in the city.

Figures provided by the Dunedin City Council show that 420 serious crashes occurred in Dunedin between 2008 and 2012. Of the accidents, 155, or 37%, happened at or within 50m of an urban intersection. The intersection accidents resulted in 180 serious or fatal injuries.

The most common causes of accidents were failure to give way, poor observation, turning at crossings and pedestrians.

Around 58% of the crashes occurred in dry daytime conditions.

Sergeant Chris MacAulay said intersections were one of the biggest problem areas for police.

Certain intersections, such as the St Andrew St and Castle St intersection and the Hillside Rd and King Edward St intersection, had more crashes than others usually because of high traffic volumes.

Motorists could be fined $150 for running a red light, or accelerating through an intersection, and contrary to popular belief it was a offence to run an amber light, although this depended on the discretion of the officer involved, Sgt MacAulay said.

If an accident occurred, those involved could also be looking at criminal charges depending on the circumstances, he said.

Police regularly stationed officers on foot to act as ''spotters'' at busy intersections. Their job was to radio through the details of cars they saw breaking the law so they could be pulled over at a safer location further down the road.