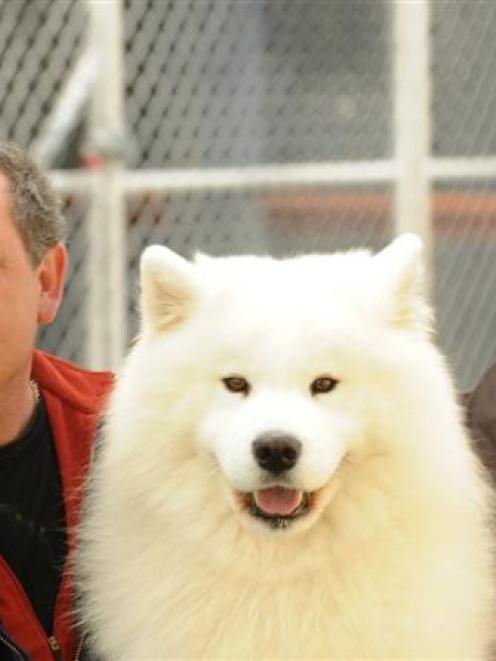 Andy and Denise Reeve, who own the Lealsam Retreat dog kennel near Mosgiel, with their dog Hugo. Photo by Peter McIntosh.
They might be cute, white and fluffy, but a Dunedin kennel of award-winning Samoyed breeding dogs could soon be leaving town.

Dunedin dog breeder Andrew Reeve and wife Denise have been forced by the Dunedin City Council to apply for land-use consent, after a neighbour complained about barking from the couple's kennel near Mosgiel.

Mr Reeve told the Otago Daily Times the couple had been breeding Samoyeds for 30 years, but also running the small-scale Lealsam Retreat commercial kennel operation on their 6ha Puddle Alley property for the past five years.

Their kennel had enough room for three breeding Samoyed bitches and their litters, plus space for up to a dozen dogs from members of the public needing kennel space.

A complaint about barking - from a neighbour living about 1km away - led to a visit from DCC animal control officers last year, who ordered the commercial kennel operation to cease, Mr Reeve said.

After negotiations, the couple were permitted to continue their operation while seeking land-use consent from the council.

The barking that prompted the complaint was eventually traced to another property, but the requirement to seek consent remained, he said.

Two neighbours also declined to sign forms giving approval for the operation to continue, meaning the matter would go to a publicly notified consent hearing in June.

Mrs Reeve said the Samoyeds were her "passion" and the couple's award-winning kennel was "quite elite", shipping some pups to breeding kennels overseas and selling others to a waiting list of well-vetted buyers.

"We're the top Samoyed kennel in New Zealand. We have the top show dogs ... we have broken so many records in the Samoyed world it's not funny."

Public notification of their consent application had led to out-of-hours visits to their home by people wanting to see the kennel, and even debate - based on incorrect information - on a Dunedin radio station, she said.

Mr Reeve said the situation had become "pretty Mickey Mouse" and "out of control".

"You do get a bit annoyed because you're trying to do something for the community and help little old ladies who don't want to drop their dogs off at [larger boarding kennels] which are really noisy."

The couple were seeking consent for a maximum of 15 Samoyeds - allowing for a small number of breeding bitches and the litters they produced - plus up to 15 other dogs, and a small cattery catering to a handful of cats.

Most neighbours seemed to support their operation, and he was hopeful of obtaining consent from the council.

If not, the couple would sell up and move away from Dunedin, he said.

"If we don't get consent we'll just shut down and we'll move. We're looking at moving up north if that's the case."

"If they get consent obviously they can continue. If they don't get consent they'd have to restrict the activity to just breeding their own dogs."

It was the commercial nature of the public kennel operation that made it a discretionary activity in need of consent under the council's district plan, he said.

"If it had just been looking after friends' dogs on the occasional basis then probably we wouldn't have been concerned about it."

The council opted for a publicly notified process - allowing anyone to make submissions - because approval from all neighbours was not forthcoming, and it was hard to "draw a ring around who exactly is affected" by barking, he said.

"It's a noise by its nature that is not continuous. Whether it's annoying can be very subjective too. Some people like the sound of dogs and some people can't stand the sound."