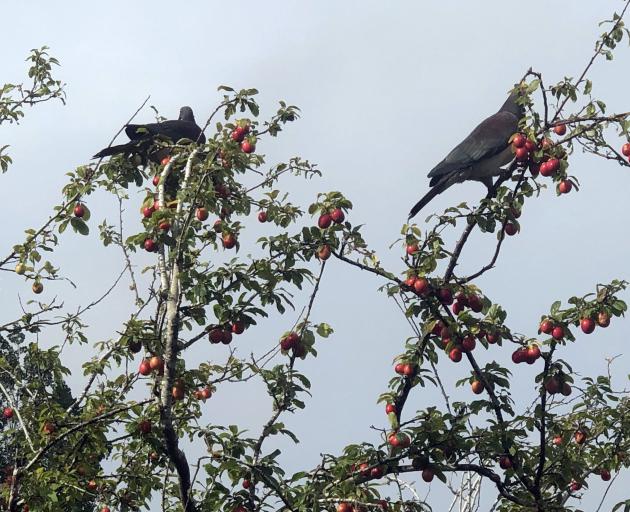 Kereru feast on plums at the Morton Family’s crib in Warrington. PHOTO: MATT MORTON
Production of the 2021 batch of Morton Family Crib Plum Sauce is in jeopardy this year, after a flock of 12 kereru recently ravaged the family’s ripening plum tree at their Warrington holiday haunt.

"This is the first time we’ve seen such a large flock at one time, having a feed.

"It’s become an annual family tradition we started 12 years ago, when the kids were wee tots, to pick the plums and immediately start into our crib sauce-making venture.

"Many friends and neighbours have benefited from the odd jar dropped off over the years, and it feels nice to slip back into a simpler time without needing a digital device for entertainment."

He said only once before had the birds managed to clear the whole tree before the family could pick any of the plums.

"Most years there are enough for all to share — pigeons and humans alike."

Because the plums were in such short supply this year, it would be difficult to keep up with demand, and the 2021 Morton Family Crib Plum Sauce might become their most popular vintage yet.

Based on data from last year’s annual Great Kereru Count, between September 18 and 27, more than 10,279 observations of kereru were made, and a total of 21,509 kereru were counted across New Zealand.

The numbers were significantly higher than the previous year’s 6700 observed and 14,248 counted.

Project Kereru founder Nik Hurring, of Dunedin, said it was not unusual for kereru to fly around in flocks.

She said there had been reports in the past of flocks of about 40-50 in the Catlins area, and more than 100 in a paddock on the West Coast.

"They tend to flock and eat what is seasonably available. So with plums being around at the moment, it’ll certainly be one of the things they’re going for.

"Now that this group of kereru know the plums are there, it could be a good idea for the family to get in a bit sooner next year if they want to make plum sauce."