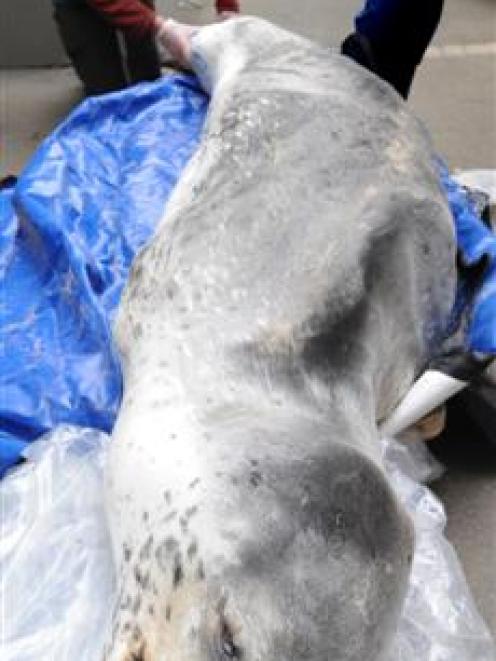 Department of Conservation marine ranger Jim Fyfe admires the specimen of a 3-metre-long leopard seal yesterday. Photo by Peter McIntosh.
From the depths of the Antarctic to the walk-in freezer at Otago Museum, it has been quite a journey for a 3m-long leopard seal.

The adult female was reported to be in poor health on Waikouaiti beach late last week and is believed to have died on Friday from natural causes.

It took eight people to lift the leopard seal, estimated to weigh more than 200kg, on to a trailer, and it was then taken to to the museum for storage yesterday.

Department of Conservation marine ranger Jim Fyfe said leopard seals were normally found around the Antarctic, and the Otago coast was near the edge of their range.

Since 1999, there had been 63 recorded sightings of leopard seals along the Otago coast, and 23 of those were recorded in the past year.

So far this year, they had been seen at Oamaru, Moeraki, Aramoana, Brighton and Company Bay, and Doc advised the public to keep their distance.

Mr Fyfe said it was unclear why numbers of leopard seals were increasing, with the topic requiring further study.

The majority of sightings along the Otago coast were of juvenile leopard seals, and it was "highly unusual" to find one of this size.

The specimen would provide an opportunity to find out more about the mammal, he said.

"She is a great specimen, in a great condition."