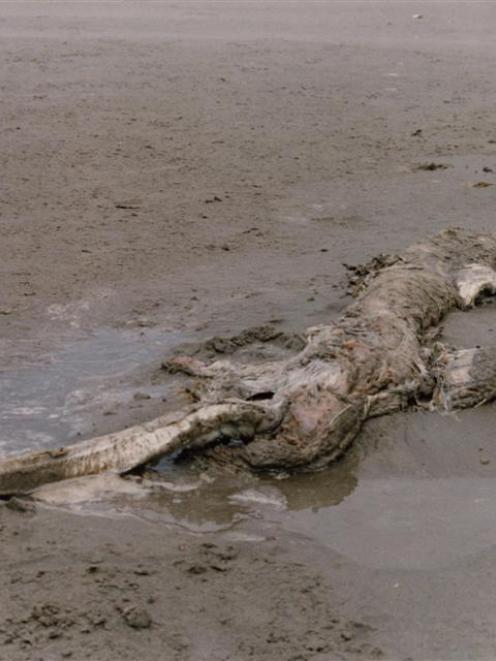 This decomposing creature from the depths, found at Amberley Beach, north of Christchurch, had several tantalising features that have added to the potential intrigue.

It was more than 11.5m long, including a long "neck", of more than 1.5m, and had apparent wing-like structures, and feather-like fibres.

Peter Ritchie (81), these days a busy Rangitata resident, taxidermist and international traveller, has been left scratching his head for decades about exactly what he encountered one day in late 1977.

Mr Ritchie had initially felt "totally, totally in awe" of the creature, the like of which he had not seen before, despite his considerable experience as a fisherman and a taxidermist.

He took seven photographs and cut off its head, forwarding these to the Canterbury Museum.

Museum staff believed it was a member of the shark family.

A check Mr Ritchie made with the Denver Museum of Nature and Science in the United States had produced a similar finding, but over the following decades he continued to have his doubts.

The scientists have since identified the creature as a basking shark, a view apparently also shared by staff at Te Papa.

But Mr Ritchie remains unconvinced, and believes this creature had several features not found in sharks, and may have been the remains of an ancient plesiosaur.

Plesiosaurs had paddle-like limbs and are believed to have become extinct about 65 million years ago.

Mr Ritchie also raised the possibility he may have found, washed up, the same rotting creature which several months earlier, in April 1977, had been accidentally hauled from the depths by Japanese fishing vessel Zuiyo Maru while it was fishing for mackerel about 50km east of Christchurch.

That creature was photographed on board the vessel before being returned to the water.

Prof Fordyce said basking sharks were "impressively large", but fed on tiny prey, which they filtered from the water.

A study by two researchers had noted basking sharks were fairly often seen or caught by commercial trawlers in New Zealand waters and were seen closer to the shore, mostly in spring and summer.

Prof Fordyce said the long "neck" shown in the photographs appeared to be the vertebral column - equivalent to the human backbone - but not as "bony", given a shark skeleton was mainly formed of cartilage.

The wing-like structures appeared to be the heavily decomposed fore-fins, and some of the "strand-like features" appeared to be "rotting tissues", possibly "resistant fibres of a collagen-like material".

Over the years, many large decomposing sea creatures, including some found in New Zealand waters, have been labelled as "monsters" and even plesiosaurs.

One Japanese scholar initially raised the possibility that the Zuiyo Maru finding might have been a plesiosaur, but international scientists have since generally rejected such claims, and many believe it was a basking shark.