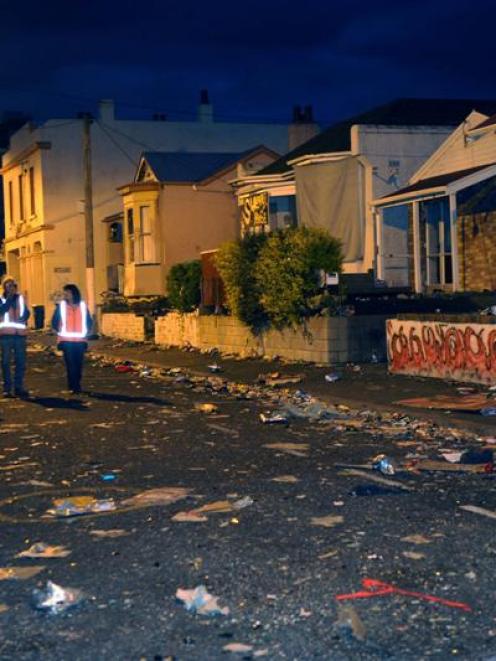 The council's transportation department is tasked with not only taking care of the city's roads, but anything which is on them or the road reserves.

Transportation operations assistant contract supervisor Suzanne Donaldson has been in the job for three years, after a previous four at the council's call centre.

"I love my job. It's an extension to customer services ... The flip side of what I do is I get to go out and see what the issues are," she said.

Her role is to co-ordinate council contractors in the repair and clearing of the city's road and road reserves, but she also enjoys working with other departments to come up with ways of tackling rubbish problems and improving the face of the city.

For the past three years, she has been meeting monthly with the waste department, its contractors, the University of Otago and Campus Watch to discuss what has been happening in the student quarter.

"Everyone was doing their own thing, but this way it's opened up the communication with everyone. It made things like the Hyde St clean-up possible."

The clean-up after the annual keg race was organised for the first time last year after contractors arriving to clear the street after the 2010 event were faced with large volumes of rubbish and spent hours clearing the area.

About 60 students helped clear the street the morning after and she was pleased the students had taken responsibility for themselves.

She subsequently learnt about the dire need for bottle banks in North Dunedin as blue bins often overflowed, creating hazards on footpaths.

"One blue bin is not enough for one flat," she said.

The only hitch was finding an organisation willing to "host" the banks to prevent them being tampered with, she said.

"Through the group we are working to find areas [for bottle banks] not only for students, but for the public. We are hoping to get one in the South Dunedin area, as well, because there are areas out there that are glassy and I don't know why."

Other ideas included finding a way to "discourage the couch burnings" in the student area.

A recent campaign to "dob in red light runners" to police was "enough to raise awareness" of the problem, and Ms Donaldson hoped something similar could be set up for couch burners.

If people knew they could be prosecuted for doing it, hopefully they would be less likely to light one, she said.

"We want to be proactive," Ms Donaldson said.

Along these lines, the council was devising other ways to "change the culture" of people discarding rubbish.

A "very helpful" initiative of the council's was organising community service workers to pick up rubbish around the city.

"It's about the culture. A lot of [community service] workers are young and a lot of the junk food wrappers at John Wilson Ocean Dr come from cars with young people in them. By picking up that rubbish, hopefully we are getting them to change their attitude and other people's attitudes."

An idea to link fast food wrappers with vehicles was also "toyed with".

"We would love to get a programme off the ground where maybe the registration plate of cars going through drive-throughs was put on the wrapper so if it was found, it was traceable," she said.

The council had also determined the "driving point and walking point", or rubbish problem areas, based on the time it took to consume food from various fast food outlets.

Piles of discarded rubbish were often found in these spots on Monday mornings and rubbish bins had been installed in appropriate places.

Ms Donaldson encouraged people to contact the council about any concerns they had.

"We keep a history of what's happening. We rely heavily on customers to make the call and follow procedure to build a history," she said.