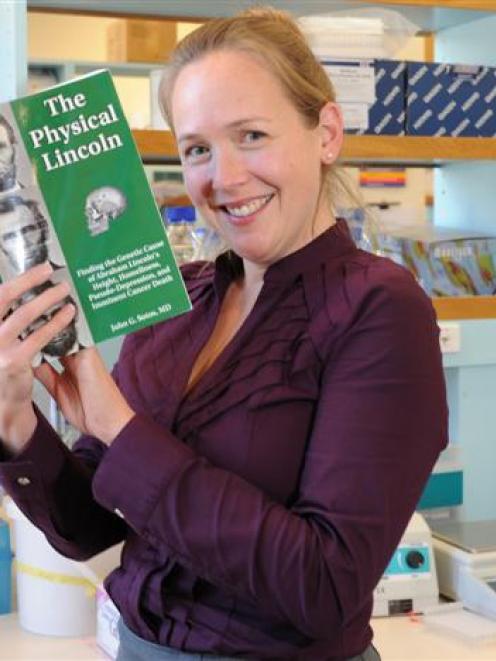 As part of the project, a piece of the blood-soaked remnants of a dress, upon which Mr Lincoln reportedly bled after he was fatally shot, was sent to Otago University's anatomy department for DNA testing. It is still stored in one of the department's lab freezers.

The project aims to prove Lincoln suffered from MEN2B, a rare inherited cancer syndrome, rather than Marfen's syndrome, which other academics believe he had.

John Sotos MD, the instigator of the project and a former medical technical adviser for television programme House, put forward the idea in his book The Physical Lincoln that the rare syndrome accounted for Lincoln's unusual physique and appearance. Among his unusual features were his asymmetric face and the long limbs.

In order to prove his theory, Dr Sotos needed some of Lincoln's DNA, which was why he got in contact with Dr Ann Horsburgh, who works in the Otago University's anatomy department, at the start of 2009 while she was living in California.

Dr Horsburgh, who normally retrieves DNA samples from prehistoric African material, said she was able to search for DNA on artefacts from Lincoln's assassination because "DNA is DNA", no matter what era it was from.

In the years since the start of 2009, she had attempted to retrieve DNA from various Lincoln "relics" in the university's anatomy department labs, including a piece of actress Laura Keene's blood-soaked dress, upon which the president reportedly bled after he was shot by John Wilkes Booth on Good Friday in 1865, as well as a pillow and handkerchief.

Due to DNA's fragile nature, she had so far been unable to retrieve any DNA, which meant the project was in limbo until more artefacts could be sourced.

This would not be easy as "bits of dead presidents are hard to come by", she said.

However, because Lincoln was shot in the head and "head wounds bleed abundantly" he was reported to have bled on "a lot of things" in the nine hours it took him to die, she said.

The best artefact for retrieving DNA would be something that had been stored in a cool and dry place.

Dr Horsburgh was still "cautiously optimistic" of finding traces of the syndrome in Lincoln's DNA and was far from giving up on the project.

The work Dr Horsburgh has done on the project featured on the National Geographic documentary, Lincoln's Secret Killer?, aired in the United States last year.

Dr Jo-Ann Stanton, from the Otago University anatomy department, has also been involved in the project.