The Portobello Marine Laboratory. Photo: Gerard O'Brien
Three academic staff members may lose their jobs at the Department of Marine Science at the University of Otago, in a bid to reduce the department's $4.2 million deficit.

Several experts on marine life are employed by the department, which has research facilities in Portobello, Stewart Island and Fiordland.

The Otago Daily Times has obtained a copy of a staff consultation document which proposes to review eight academic positions and axing three after an academic selection process.

Three fixed-term roles were not included in the review, and some of the department's 16 permanent positions were out of scope, including a role funded by a Rutherford Discovery Fellowship, one held by a staff member with a role at Niwa, and that of the incoming head of department.

A university spokeswoman said the department had ''too few students relative to the number of staff, and is incurring heavy losses through the operations of the research vessels and also its outreach arm the New Zealand Marine Studies Centre [NZMSC], based at Portobello''.

''The department is a vital, research-led programme known for excellence in teaching and research and a return to a strong financial base will future-proof its position.''

It has 135.9 equivalent full-time students this year, and employs 39 professional and academic staff.

According to the proposal the fleet of six boats and the NZMSC had expenses ''two to two and a-half times higher'' than their income.

Marine science student Tayla Hill (23) said she was told of the proposal last Friday by a ''visibly distraught'' lecturer, and the news was ''devastating'' and disruptive in the lead-up to exams, which begin next week.

''[We want to] raise our voices and stand up for teachers that we truly believe in,'' she said.

Ms Hill had started an online petition objecting to the staff cuts, which received more than 1500 signatures in less than 24 hours.

A consultation period for the proposal began on October 4 and will end on October 25, and decisions will be made by the end of November.

However, Ms Hill said uncertainty about when changes would be advertised to the public had spurred her to create the petition.

Tertiary Education Union Dunedin organiser Kris Smith said the union would be releasing a statement from staff later this week.

In addition to staff cuts the proposal includes the sale of two boats, Typhoon and Naiad, based at Stewart Island.

Skippers would retain their positions, but the appointment process for a new chief skipper would be halted and the position disestablished.

One laboratory position at Portobello would be transferred to the geology department, and another position would be left vacant until the new head of department had had time to assess whether it was needed.

No new contracts would be signed by the NZMSC for educational programmes that did not cover operational expenses.

- Written submissions can be emailed to pvc.sciences.ea@otago.ac.nz until October 25, at 5pm. 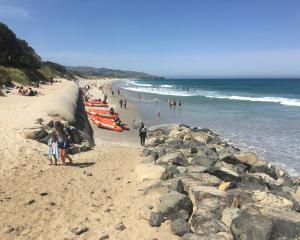 Ridiculous, 3.4 students per staff member. No wonder they are loosing money handover fist. As an ex-Otago U staff member, it makes no sense for Otago to have facilities spread out all over- premises in Auckland, Christchurch, Wellington etc It seems to be spreading the net a bit thin to catch a few. Totally uneconomic business model. Each uni should be limited to its region otherwise another Otago Polytech type takeover by central government is on the cards.