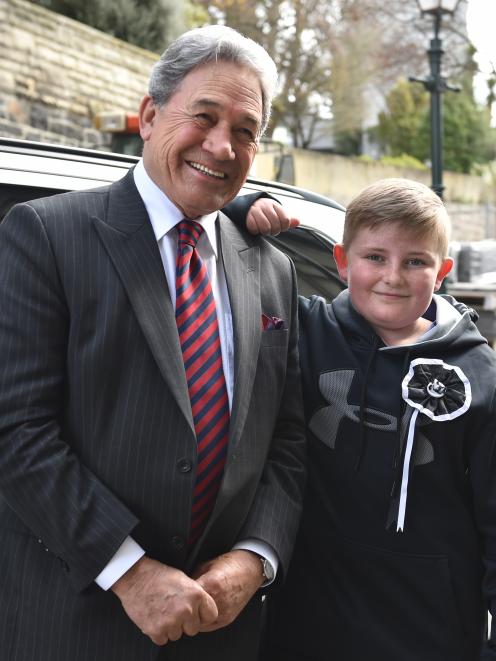 Alex Van Dervliet is one of New Zealand First leader Winston Peters’ biggest fans in Dunedin, and probably one of his youngest.

Yesterday, the 12-year-old got the chance to meet his hero in person when his school gave Alex the day off to attend a meeting held in Dunedin by Mr Peters.

Alex, a pupil at St Mary’s, in Mosgiel, has attended three political meetings with his grandparents this year.

He attended a meeting at Forbury where Mr Peters spoke earlier in the year, he went to the Shiel Hill meet-the-candidates evening on Sunday and to yesterday’s rally.

But yesterday was the first time he had met Mr Peters in person. Alex shyly waited until Mr Peters drew up in the car driven by Clutha-Southland candidate Mark Patterson before being introduced.

Mr Peters was gracious in congratulating Alex for his interest in politics and thanking him for his support.

Alex talks politics to his family and to the parents of his friends, some of whom he has convinced to vote NZ First.

He convinced his grandfather, Mike Vaughan, to put a large Winston Peters sign on his fence, and another one on the fence next door.

Alex said he had read a lot about NZ First policies and liked them.

Afterwards, he said he had enjoyed yesterday’s meeting he attended with his grandparents. He planned talking more politics with his parents last night.