Commercial fishing boat Echo tows the submerged recreational boat back to Carey’s Bay after it sank near Papanui Beach, on Otago Peninsula. Inset: The bow of the sinking boat points skyward off the Dunedin coastline yesterday. Two minutes later, it was fully submerged. PHOTOS: GERARD O’BRIEN
Wet, but not worse for wear, two fisherman were plucked from their sinking boat, moments before it disappeared below the surface off the coast of Dunedin yesterday.

A mayday call was sent from Orca, a 7m aluminium recreational boat, about 11.25am after it got into trouble just north of Puddingstone Rock, near Papanui Beach, and by 12.50pm it was fully submerged.

Otago Regional Council harbourmaster Steve Rushbrook said the mayday call was picked up on channel 16, and the boat’s owner also had ‘‘the wherewithal’’ to set off a flare, which meant other local fisherman were able to respond quickly.

‘‘They were in a position to pick the guys out of the water whilst the boat sunk from underneath them. So they’re very fortunate.

‘‘They did a few things very well. They had good communications, they all had life jackets on and the use of flares was key in this scenario.

‘‘They’re very fortunate to be home safe without injury. 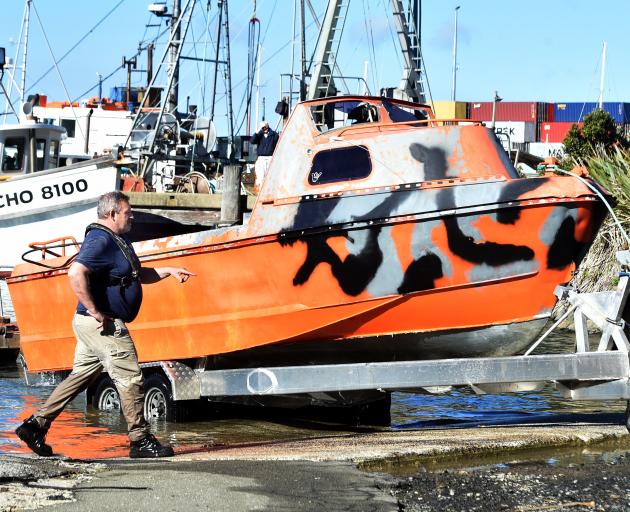 Otago Regional Council harbourmaster Steve Rushbrook inspects the vessel after it is loaded on to a boat trailer at Carey’s Bay. PHOTO: PETER MCINTOSH

‘‘And I think they were very pleased to be in a boat, dry and rescued.’’

Mr Rushbrook said he and harbourmaster staff were joined by commercial fishing boat Echo and its crew, and were able to get a line on the submerged boat.

Echo then towed it to Carey’s Bay, in Otago Harbour.

‘‘We were very fortunate that the fishing boat Echo was in the location.

‘‘Without him, that boat wouldn’t be here right now. It would be in 20m of water.

Mr Rushbrook said it was not yet known why the boat sank.

Onlookers suggested something might have broken off the inboard motor, which allowed water to flow into the hull.