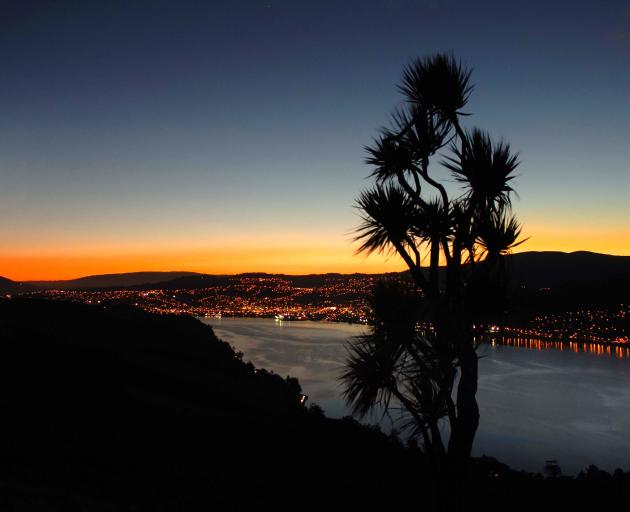 Dunedin city basks in a the red glow of high-pressure sodium lights in a view from Highcliff Rd in 2006. PHOTO: STEPHEN JAQUIERY
Steps should be taken to mitigate the effect of LED street lamps on nocturnal insect populations, a Dunedin researcher has said.

The advice comes after a British study, published in the August edition of the Science Advances journal, found evidence that street lights caused declines in moth caterpillar numbers.

LED street lights like those installed in Dunedin in recent years had the largest effect with a 52% drop in caterpillar numbers compared with unlit areas.

High-pressure sodium lights, the technology used in Dunedin before the LED rollout, caused a lower decline in caterpillars at 41%.

Royal Society Rutherford Discovery fellow Dr Barbara Anderson, who is based out of Otago Museum, said while there had not been similar research done on native species in New Zealand, the effect of LED lights on insects in general was well known.

The lights had an impact on moths and other nocturnal insects because they emitted high levels of blue light. 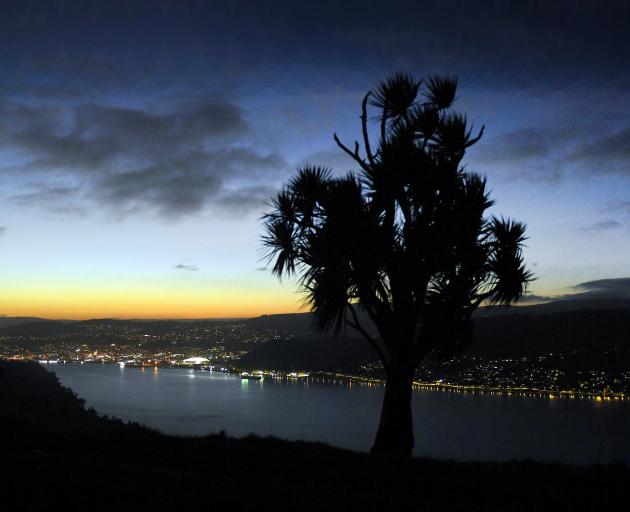 The city is draped in darkness, new LED lights spilling less light skyward last Monday night. PHOTO: STEPHEN JAQUIERY
Moths were particularly affected because their eyesight was different from that of a human, seeing more colours to the blue and ultraviolet end of the colour spectrum.

‘‘So the moths are ... thinking that it’s daytime if there is blue light at night.’’

This confusion could drastically change the behaviour of moths.

‘‘They’re not ... going around pollinating plants, mating, laying their eggs, reproducing, all of the things they would normally be doing.’’

However, Dr Anderson said she was not saying LED lights should go, as they had other benefits including lower power consumption and reduced light pollution.

Instead, steps should be taken to mitigate LED lights’ effects on nocturnal insects, she said.

The colour of LED lights is measured in Kelvins (K); a higher number is towards the blue end of the spectrum, and a lower number means emitting redder light.

Mitigating steps could include dimming lights during low-usage times, and switching lamps to lower Kelvin units over time as replacements are needed, Dr Anderson said.

Rules could be put in place for new developments limiting the new street lamps to those at the redder end of the spectrum.

Closer to home, people could look to minimise light pollution at their own properties, eliminating lights that were not needed and connecting others to sensors or timers.

The majority of new streetlights installed in Dunedin are rated 3000K.

Lights rated at 2200K have been installed in more rural areas such as Waikouaiti, Karitane, Waitati, Warrington, Seacliff, and locations on Otago Peninsula.

Other cities in the country have opted for bluer LED lights, Auckland and Christchurch both installing 4000K bulbs.

Great to see this issue being highlighted. The reliable rhythm of night and day gives plants and animals signals for natural cycles of feeding, mating, migrating and navigating. Humans are altering this natural rhythm by flooding the world with artificial light.

Pat this is so true and so many of us pointed this out to DCC staff- but it was ignored.

There is a single purpose for street lighting that should be considered above all other ideas. That is providing a safe environment for people to move about. It needs to be bright enough to illuminate hazzards both environmental and predatory.

This is a little bit more serious than upsetting a few "moth fanciers". In fact some are claiming that we are currently in the midst of an "Insect Apocalypse". Ecologist Dave Goulson told The Guardian in 2017: "We appear to be making vast tracts of land inhospitable to most forms of life, and are currently on course for ecological Armageddon."
The decline has been attributed to habitat destruction caused by intensive farming and urbanisation, pesticide use, introduced species, climate change, eutrophication from fertilizers, pollution, and artificial lighting.
Insect population decline affects ecosystems, and other animal populations, including humans. Insects are at "the structural and functional base of many of the world's ecosystems." A 2019 global review warned that, if not mitigated by decisive action, the decline would have a catastrophic impact on the planet's ecosystems. We need insects to pollinate our crops, recycle dung, leaves and corpses, keep the soil healthy, control pests, and much more and and also for larger animals, such as birds, fish and frogs, which rely on insects for food.

Hi Pat. I think you are missing my point. Street lighting is primarily for public safety. If DCC have made another mistake and chosen "bluer" light leds over yellower ones then that is one thing. But Street lighting overall brightness should not be degraded by opting for dull and ineffective lights.
Council may replace the current LED lights over time with yellow lights, but if you believe the suppliers the life of these globes is 5 to 20 years so any alternate riollout will take a while. What Dunedin ratepayers can't afford is to spend millions "fixing" this decision to match what you prefer. And neither should lighting be turned off or dimmed at some random time with the assumption everyone is at home in bed at 10pm.

Personally i use the yellower lighting at home for a softer look. Some people opt for the white (bluer) LED lights. Chosen properly each type can provide good safe lighting. But with yellower lights the wattage and power use needs to he higher than the white / bluer lights. Again a compromise of power cost over light level.

Let's get things in perspective here. People benefit from insects, birds and other creatures on this planet. 'People' decided to use fossil fuels to move about. It has not proved 'safe' even given perfect condtions. It's almost too late to change its effects, but at a local level lets us do the right thing.

Agreed! It's not "all about us" - humans' convenience and budget seems to always be at the forefront. But we are at a tipping point. I dread in ten years, reading comments in forums like this, with panicked readers who used to not give a fig about the environment realising we're in an irreversible tailspin to planet catastrophe, saying "but why didn't they TELL us, why didn't they have LAWS to save the planet? Why didn't our councils and politicians DO anything?"
Insects are pivotal to human survival.
Yet we make our cities uninhabitable deserts with very few chinks to let wildlife in, what with pesticides in almost every garden and street; concrete gardens; lawn deserts; people neglecting to plant for pollinators or birds; multiple cat households where cats are able to roam at night, killing birds, lizards and insects. And now these lights that harm wildlife.
Our council can do the right thing, and should do the right thing: ensuring street lighting that helps insect life; stopping use of neonicotinoid pesticides by subcontractors; creating bylaws to ban cats from new subdivisions near nature; encouraging residents to plant small trees and shrubs in every garden.

Which would all be an argument except that lights have been shown repeatedly not to make things safer. Also, brighter lights make darker shadows, the dark/light contrast makes it harder for people to see, and the blue hue makes it really hard for anyone with older eyes to see properly. Turn the things off after 11pm! If people want to be out they can take a torch.

I think you will find that any issue that does not suit the DCC ideologue of let’s save the environment at any cost, will be ignored. Unfortunately much of what they do has not been properly checked for cost and benefit. For example make things as difficult and expensive as possible for motorists to come into town. Great idea if you have a public transportation system fit for purpose which Dunedin does not. By taking away parking the benefit is to reduce cars in Dunedin but the cost is to business. Out habits are changing, apart from groceries we now buy most things on line. Last month $300 on four pairs of Sketcher shoes (Shipped from Auckland and Australia) We save the cost and hassle of parking our car, though the courier still needed to use fuel for our rural delivery! Well going back to the fate of our insects- DCC has ignored some fundamental issues about LCD lights and as far as the moths are concerned they couldn’t give a light?