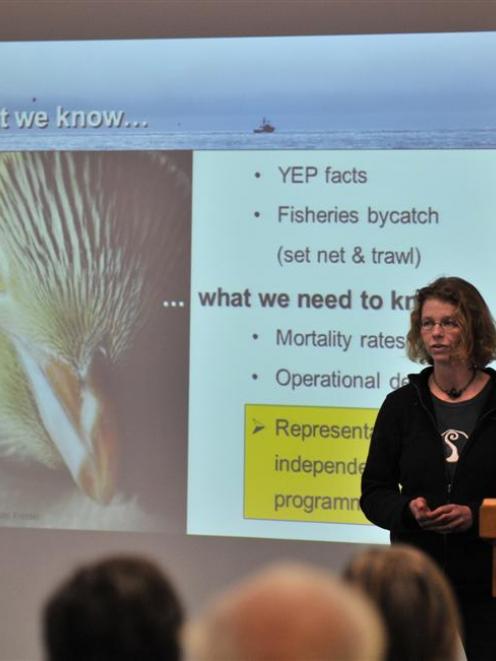 Research consultant Ursula Ellenberg details the effect of commercial fishing operations on yellow-eyed penguins, at a symposium in Dunedin on Saturday. Photo by Jane Dawber.
More data must be collected to reduce the number of yellow-eyed penguins inadvertently killed through commercial fishing operations around Otago and Southland, conservationists were told in Dunedin at the weekend.

Dr Ellenberg said 72 of the birds were killed as a result of becoming by-catch in gill nets within New Zealand's exclusive economic zone between 1979 and 1997, although it was estimated a far greater number of such deaths went unreported.

It was also estimated a further 70-odd yellow-eyed penguins were killed as a result of becoming trawling or long-line fishing by-catch each year.

"We desperately need good figures for mortality rates of yellow-eyed penguins, especially distinguishing between juveniles and adults as well as males and females.

"Reported by-catch rates are low, partly because of population decline, so we need high observer coverage to get accurate data," Dr Ellenberg said.

A major problem for those trying to maintain the yellow-eyed penguin population was New Zealand's low rate of independent monitoring on commercial fishing vessels, she said.

There was no incentive for fishers to report by-catch, especially when it comprised species such as the yellow-eyed penguin.

Dr Ellenberg said the subsequent lack of data made it difficult to lobby for additional controls and mitigation measures in order to prevent further deaths.

A recently imposed ban on commercial netting within 6.4km of the coast was a step in the right direction, but meaningless if not policed, she said.

"There will be a lot of set nets within those areas," Dr Ellenberg said.

Conservationists failed to get observer coverage on boats in Foveaux Strait and around the Otago Peninsula this year, but would continue to push for increased monitoring, she said.

On small set-net vessels, which could not accommodate an observer, electronic monitoring was being trialled.

It connected cameras, GPS and winch sensors to evaluate the amount of catch at specific locations and times.

"Trials so far in New Zealand have had promising outcomes in that you get a very detailed picture of what's happening at sea. I'm not sure how well a yellow-eyed penguin will show up on camera footage, but it's worthwhile because we won't manage to get an independent observer on all boats," Dr Ellenberg said.

The Department of Conservation, Forest and Bird, World Wildlife Fund and fisheries industry members were involved in the plan, which focused on seabirds affected by commercial operations, he said.

Under guidelines set down by the UN's Food and Agriculture Organisation, the Government was trying to establish how many seabird deaths caused by human interference those species populations could sustain.

Interventions were required if the actual numbers were greater than that, but ultimately the Government had limited resources and could not meet the demand for observer coverage, Mr Bermeo said.