Moving with the times 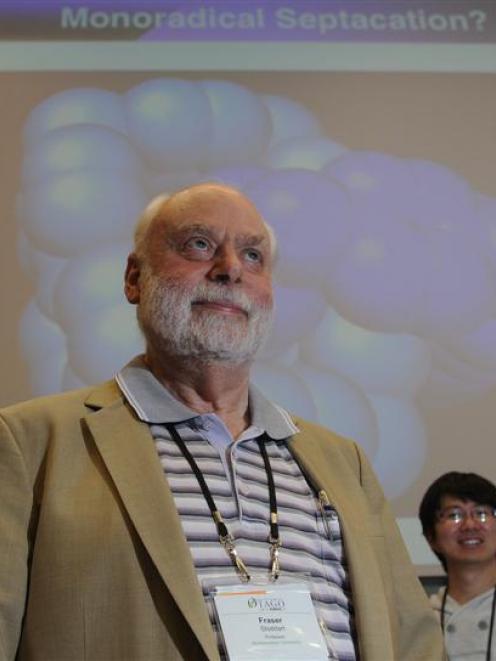 "That may be insulting to all the universities I've spent time at in my life, but the 25 years I had growing up on the farm brought home how one must always move with the times," Sir Fraser said.

His first childhood memories involved watching his father work the farm with horse and cart, he said.

The lesson he had taken from that experience was one which has stood him in good stead during a glittering academic career, which has put him at the top of the intellectual ladder in the field of sub-molecular chemistry.

Sir Fraser is one of the few chemists to have created an entirely new field of chemistry - one, which, with the assistance of a research team, including Napier-raised University of Otago alumnus Associate Prof Amar Flood, has pioneered introducing man-made mechanical bonds to chemical compounds.

He originally named his research findings, where he introduced mechanically inter-locked compounds, "lego-molecules", but the threat of legal action forced him to ditch that title in favour of "molecular mechano".

The advances he observed during his childhood on the farm were an illustration of the new and developing fields in chemistry and nanotechnology, he said.

Recent advances made by a member of his research team, PhD student Johnathan Barnes, who has discovered how to mechanically link and combine two chemical molecules, were a scientific breakthrough, which was previously thought to be an impossibility, he said.

The field was in its infancy and recent research was challenging the idea that chemistry was the "old science", he said.

Sir Fraser is in Dunedin for a conference at the University of Otago, where he will give a public lecture today at 6.30pm.

Alongside his keynote speaking duties, Sir Fraser said yesterday he was also looking forward to visiting Edgelaw Farm, the Dunedin namesake of the rural property where he was raised and which was established by the original owners of the property.

Sir Fraser has had a long academic career, holding research positions, firstly at his alma mater, the University of Edinburgh, then the universities of Sheffield, Birmingham, University of California Los Angeles, and Northwestern University, in Illinois.