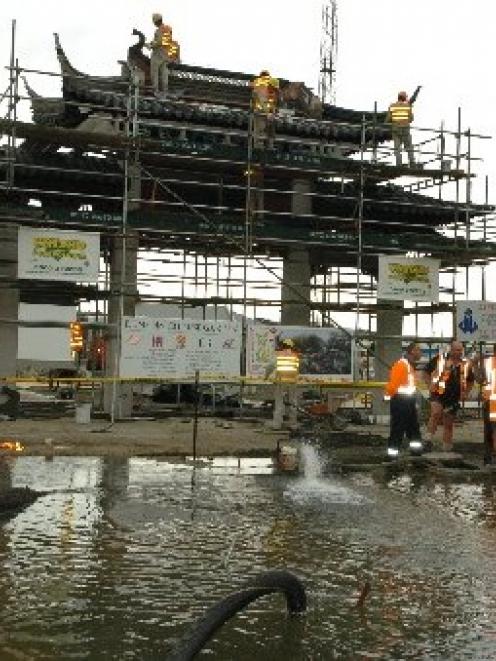 Construction work continues at the Dunedin Chinese Garden (at rear) while efforts are made to drain away a large pool of water which had formed nearby, just south of the Otago Settlers Museum. Photo by Jane Dawber
Scores of artefacts stored in a transport repair area and nearby garage at the Otago Settlers Museum were damaged after a water main burst and water flowed inside early yesterday.

By about 6am, water had lapped halfway across SH1 at the Queens Gardens, with metre-deep water also closing access to the single lane southbound on-ramp at the Jetty St overbridge for about an hour.

It is understood that contractors Downer EDI Works pumped and removed more than 100,000 litres of water by tank truck.

"I would not say it was a disaster but it's not far from it,'' museum collection manager Francois Leurquin said.

Hundreds of wooden and metal items had been sitting on wooden pallets on the museum garage floor.

Many artefacts had to be moved to safety by museum staff after the water, up to 20cms deep, and accompanied by silt, flowed under doors and rose higher than the pallets.

A large wooden panel which was once part of a tram, horse-drawn buggy wheels and related transport items, as well as old computer gear and other electrical equipment were among the wide range of artefacts affected by water in the southern third of the garage storage area.

The museum's public display areas and storage facilities elsewhere in the complex were unaffected by the flood.

Mr Leurquin was disappointed and "disheartened'' by the damage.

Museum staff, some having arrived at the complex about 6am, were hard at work throughout the day sweeping water and mud out of the garage storage area and moving items to safety.

A lot more work would be needed to assess the flood's impact and to further minimise the risk of artefact damage arising from rust or mould, Mr Leurquin said.

The museum's internal water supply was off until it was re-established shortly after 10am. This enabled the museum to open about 10.20am - 20 minutes later than usual.

The burst water main was a few metres south of the museum complex, and close to the Dunedin Chinese Garden, where Chinese artisans continued their efforts to complete the garden project yesterday.