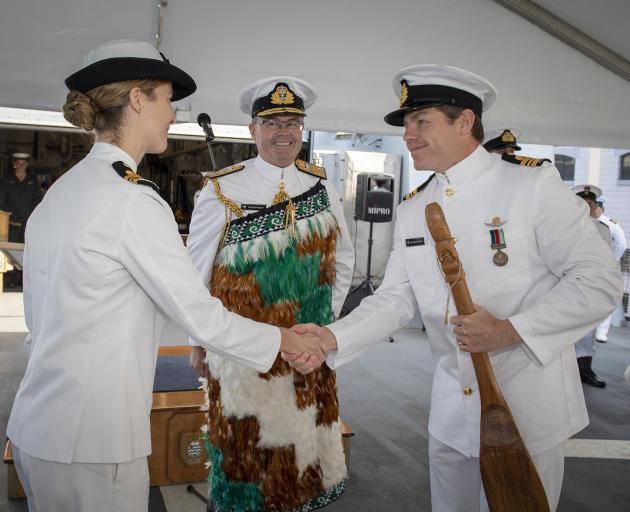 Lieutenant-commander Lorna Gray hands over te hoe, the symbol of command for HMNZS Otago, to the ship's new commanding officer, Lieutenant-commander Ben Martin, during the change of command ceremony before chief of navy Rear Admiral David Proctor at Devonport Naval Base. PHOTO: SUPPLIED
From a student flat to the officer on deck, Ben Martin has come a long way.

Lieutenant-commander Martin was yesterday named as the new commanding officer of HMNZS Otago.

The Auckland-born, 34-year-old University of Otago graduate replaces Lt-cmdr Lorna Gray, herself a former Taieri resident, who took the helm in late 2017.

Lt-cmdr Martin took command of the offshore patrol vessel at a ceremony at Devonport Naval Base earlier this month.

He came with strong navy connections, as his grandfathers and great-uncle, all from Dunedin, had also served as navy commanders.

Lt-cmdr Martin's father, Rear Admiral John Martin, was chief of the Royal New Zealand Navy (RNZN) when he retired last year, and his great-uncle served as executive officer on the frigate Otago in the 1980s.

Lt-cmdr Martin said the posting was "an opportunity to forge a new team and learn new skills''.

"I'm looking forward to getting to sea and getting to know the team and the ship. It's an exciting moment.''

He joined the RNZN as a trainee hydrographic officer in 2003 and, supported by the navy, combined his training and studies at the University of Otago before graduating with a degree in land survey and civil engineering.

His early career included a stint on board a Royal Navy frigate, HMS Iron Duke, as it conducted a counter-narcotics patrol in the Caribbean.

After returning to New Zealand in 2009, he served on HMNZS Te Kaha as officer of the watch while also completing a ship's diver course.

After gaining further diving qualifications, he served in explosive ordnance disposal teams and completed a mine warfare and clearance diving officers course in Australia in 2013, followed by a variety of diving posts back in New Zealand and overseas.

That included leading the mine countermeasures unit at the largest maritime military exercise in the world, off San Diego last year, he said.