Novice exhibitor decides to wing it 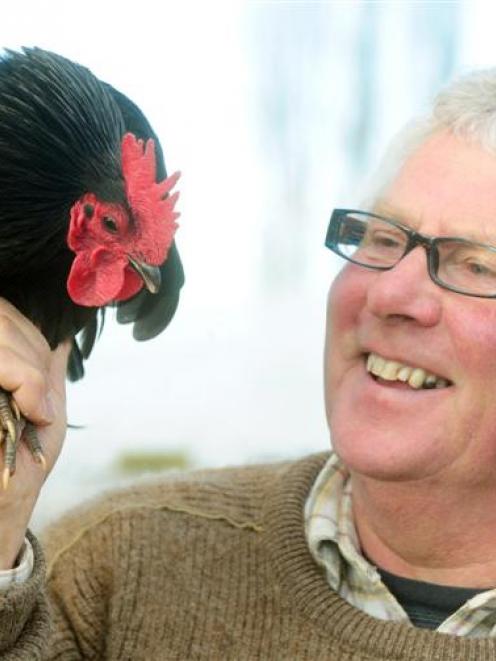 Peter Keen holds his Australorp bantam Road Runner which he says is a "bit of a star". Photo by Craig Baxter.
When Peter Keen was selecting his entries for the Oamaru Poultry, Pigeon and Canary Society's 125th jubilee show this week, exacting science played little part.

"I have absolutely not a clue what a chook is meant to look like. That's the reality," the retired school principal and novice poultry exhibitor said.

To choose which Plymouth Rock hen should go, Mr Keen (62) tossed a coin "so heads is going".

He then brought two Australorp bantam hens into the lounge to seek the opinion of his wife, Chris, who was trying to watch netball on TV. He sat one hen on each knee and studied them "and the one that looked at me the longest, with the brightest eyes, gets to go to the show".

Then there was his silver Wyandotte rooster, which pecked him all the way up the paddock.

"I expect the judge to get a bit of a surprise if he pulls [it] out," he said, with a grin.

A Golden Wyandotte hen he had hoped would be a prize-winner but which now had a "poopy bum" he had to clean before benching tomorrow, and Road Runner, the Australorp bantam, complete the entries.

Road Runner, who was the "craziest rooster", used to sit on Mr Keen's shoulder. But now he had grown up, he "wants to be one of the boys".

Mr and Mrs Keen are fond of their feathered friends and also have guinea fowl, peacocks, pigeons, a pheasant, and free-range hens on their Papakaio berry farm, supplying free-range eggs to restaurant Riverstone Kitchen.

Mr Keen first exhibited his birds last year and received two seconds and a third. He has been impressed with the willingness of more experienced exhibitors to help him.

"They want to encourage new people and are happy to sell you good quality birds," he said.

More than 1600 poultry, bantams, pigeons, ducks and aviary birds from throughout New Zealand will be on display at the show at the Drill Hall on Friday, Saturday and Sunday.

Mr Keen said he would be surprised if he won a prize ticket, although he thought Road Runner could win a personality prize.

While he was "just making a beginning" in the world of poultry exhibiting, "at my stage of life, career changes can happen quite quickly".