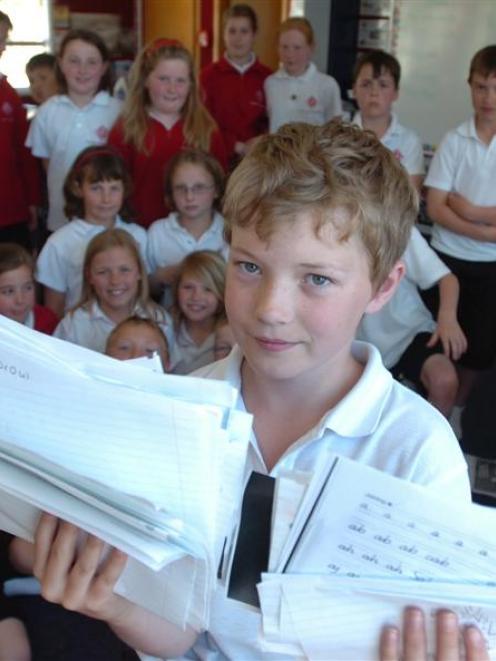 Cameron Donaldson (10) holds the results of a random bedtime survey carried out by the Otago Daily Times at the Fairfield Primary School yesterday.Photo by Peter McIntosh.
Less sleep in childhood equals more obesity in adulthood.

That is the conclusion Otago University researchers have come to - showing a possible link between the obesity epidemic and a suggested decline in the number of hours children are sleeping.

The Dunedin Multidisciplinary Health and Development Study used data collected from a group of 1000 Dunedin people born in 1972 and 1973.

The researchers used the "body mass index" of the group at age 32 when 53% were overweight, including 18% who were obese.

They set that data against "time in bed" data collected from group members when they were aged 5, 7, 9 and 11.

Three categories were established for the data from the 5 to 11-year-olds - "short sleepers" spent a mean of up to 11 hours in bed, "moderate sleepers" had between 11 and 11 hours and "long sleepers" more than 11 hours.

After discounting lifestyle factors, the study showed that "short sleep time in childhood was associated with an increased adult body mass index.

"Our findings suggest that sleep restriction could be a plausible contributing factor to the current epidemic of obesity."

A co-writer of the study, Dr Robert Hancox, said yesterday the study had not looked at whether children were sleeping less, but other studies had shown children going to bed two hours later now than they did 20 years ago.

The study also did not look at why lack of sleep as a child might affect weight in later life, but some suggestions had been proposed.

Other suggestions were that tiredness reduced physical activity and that it caused people to prefer high-energy foods to compensate for perceived low energy levels.

"It also has been suggested that more time spent sleeping simply reduces the opportunity to eat."

The paper acknowledged that the correlation between lack of sleep in childhood and obesity in adulthood was "weak", but it was of a "similar magnitude" to the connection between obesity and diet and exercise.

"In view of the increasing prevalence of obesity, an effect of this size may have important public health implications."

The Otago paper is being published in the United States journal Pediatrics.