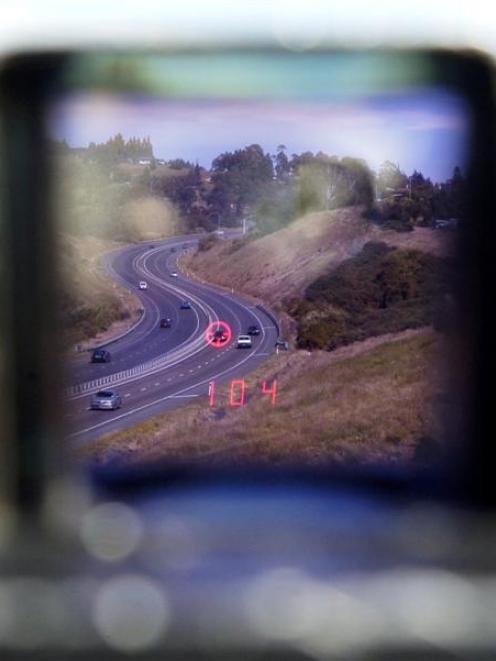 A police speed laser scans traffic on Dunedin's Southern Motorway near Fairfield yesterday. Photo by Gerard O'Brien.
It is really surprising just how many people speed - and the stories they come up with to try avoiding getting an infringement notice.

After an hour sitting at the bottom of Pine Hill Rd, Dunedin, yesterday, officers using a laser had issued more than 40 infringement notices to drivers of cars travelling into Dunedin.

Officers said women were just as likely to speed as men; older people as young people; the rich as well as the poor.

It often surprised them when they pulled a car over and saw who was behind the wheel.

Driving along the Southern Motorway, an officer in an unmarked car remarked that a Subaru was about to "fang it" past him about 130kmh, in a 100kmh zone, when he noticed the lights, pulled back and slowed down.

It happened a lot, the officer said, and it was up to police how often they issued tickets for it.

The officers spoken to were also tired of the excuses, such as being told that they must have got the wrong car as the car in front of them was going faster.

Well, sorry, but the laser has a sight, much like that on a rifle, which clearly identifies its target, so there is little chance of making a mistake.

The second-most-used excuse was that the car was travelling downhill so was going faster - but that would not account for an extra 20kmh over the limit.

The third was that police were just blatantly revenue gathering, and while police admit the Government does get money from infringement notices, they say drivers would pay nothing if they were not speeding in the first place.

Officers said people just did not seem to realise the consequences of their speeding and that police were trying to stop crashes occurring.

There was one excuse that worked for a woman, courtesy of a kind-hearted officer.

The driver told him she was speeding in order to get her sick dog to the vet and, seeing the dog draped across her knee, he let her carry on without issuing a ticket.