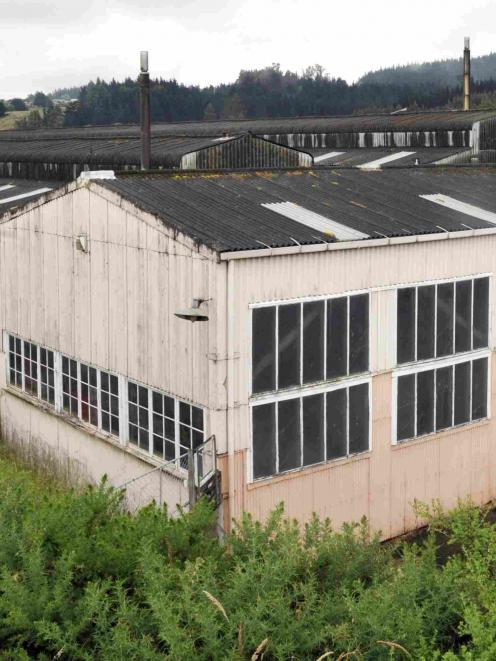 The Iron Roller Mills Building in Irmo St, Green Island. Photo by Gerard O'Brien.
Dunedin City Council's hearings committee will decide by early next month whether to grant resource consent for a new retail complex inside an old industrial building in Green Island.

Allowing the retail complex under the "guise" of heritage values would only encourage other out-of-zone developments in Dunedin, eroding the council's district plan rules, he warned.

Mr Spittle's report noted the development could draw extra customers to nearby Green Island shops, but was in an industrial zone and would not comply with district plan rules.

The development would present "a threat" to the vibrancy of Dunedin's central activity zone, including George and Princes Sts, he warned.

A submission by Mr Chirnside on Monday said the retail centre would cater for retailers, including one "bulky" tenant, with other retail types excluded to prevent direct competition with other Green Island businesses.

The new centre would draw customers from outside the city, with "little to no effect" on Dunedin retailers, he argued.

His view was supported by planning consultant John Kyle, of Mitchell Partnerships, who concluded the proposal had been "carefully crafted" to avoid direct competition with Green Island businesses and would instead bring benefits.

A separate economic assessment by Fraser Colegrave, of Covec Ltd, concluded the development would cause average turnover for other Dunedin retailers to drop 0.3%, before quickly recovering, meaning the impact would be "minor and short-lived".

The worst impact would be in Dunedin's southern CBD area, which would experience a 2.3% decline lasting just over seven months for some retailers, he said.

Mr Henderson, putting the business association's case yesterday, said the roller mills building was neither registered under the New Zealand Historic Places Act nor listed by the council as a heritage building.

The plan envisaged preserving the mill's existing structural frame and other heritage elements, but Mr Henderson said the plan lacked detail about which heritage aspects would be preserved.

Without it, the panel should be wary of allowing a development that could lead to other applications for out-of-zone developments, "justified purely by the fact that it is to be located in a historic building", he said.

The association was not opposed to business development in Green Island, but believed it should occur within the proper zone, he said.

Mr Spittle told the hearing he accepted some of the evidence concerning predicted economic impacts, and had softened his stance accordingly, but retained "residual concerns" and continued to recommend consent be declined.

Irmo Properties Ltd counsel Daniel Minhinnick said a heritage building conservation specialist could be involved in the building's development as a consent condition, to address any heritage concerns.

However, expert evidence concerning the likely economic impact was "clear", as was case law on the legality of the application, and the panel should grant consent, he argued.