A plaque to honour explorer Fedor Konyukhov was unveiled in Dunedin this week.

Last Friday marked one year since the 67-year-old explorer set out on the 11,525km journey from the Port Chalmers Yacht Club to Cape Horn, Chile — during which he spent 154 days at sea. 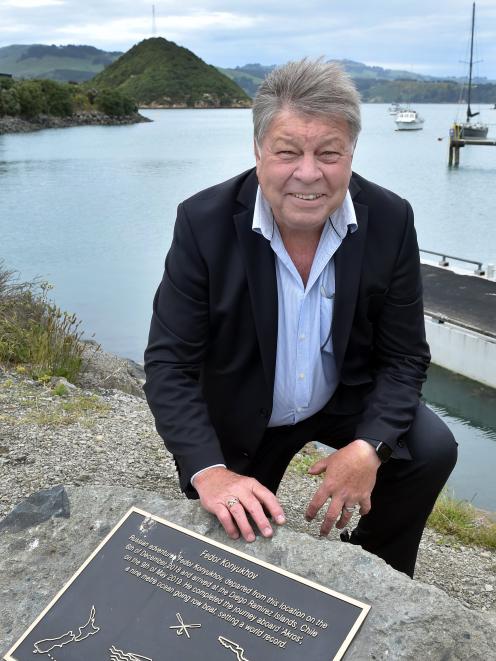 Enterprise Dunedin business relationship manager Des Adamson crouches near the Port Chalmers Yacht Club at Peninsula Beach Rd, at the point where explorer Fedor Konyukhov set off on his voyage to Chile. Photo: Peter McIntosh
It was the first leg of his round-the-world voyage.

‘‘To me, it is one of the great endurance tests of mankind, rowing from here to Chile.

‘‘He had no support boat, his boat was rolled over many many times, you can imagine what he went through.

‘‘I was initially approached by former mayor Dave Cull last year who passed it on to me, and I spent most of last year communicating with Fedor and his manager.’’

Dunedin’s position in relation to Cape Horn allowed a direct and relatively safe route to be taken.

‘‘I was stunned when I heard about Fedor — I wish I’d known about it earlier,’’ he said. ‘‘It was an incredible journey that definitely deserves this plaque.’’

The second leg of the round-the-world journey for Mr Konyukhov will start this month when he sets off from Cape Horn to Cape Leeuwin, Western Australia’s most south-westerly point. The third leg starts in December 2020, when he will row from Australia to Dunedin.