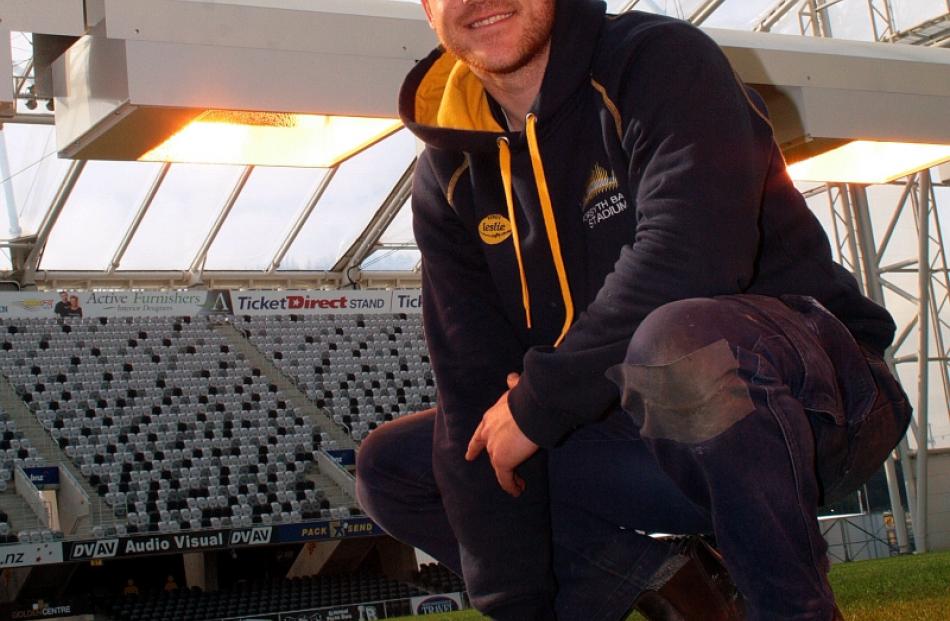 Dunedin Venues turf manager Troy Jordan checks on the progress of the grass at Forsyth Barr Stadium as it gets a boost under grow lights. Photo by Dan Hutchinson

Watching grass grow might not seem like an exciting job until you meet the man in charge of Forsyth Barr Stadium's patch of dirt.

From the time the first seeds were sown at the beginning of 2011, Dunedin Venues turf manager Troy Jordan has been measuring, grooming and experimenting with the unique surface.

It is the world's only natural grass pitch grown in a covered stadium with about 3% of it made from artificial strands to help bind it together.

He left a job at Melbourne's Etihad Stadium to come to Dunedin and, despite the challenging environmental conditions, the grounds staff had proved grass could be grown in the Forsyth Barr Stadium.

The main issue is the lack of natural light in winter, with half of it filtered out by the semi-transparent roof. Low wind movement and humidity also create potential for disease.

Eight racks of portable grow lights are used to boost grass growth in the winter and any dew that rises in the morning is quickly mopped up.

''It creates challenges - not only is Dunedin a dim place in winter but you have something that filters light as well.''

Other stadiums also require grow lights to varying degrees to cope with shading problems but the glasshouse effect of the stadium does help sometimes.

''We are growing [grass] a lot quicker than other [sports grounds] in the South Island at the moment.''

Mr Jordan ''fell'' into turf management because he loved sport and wanted to be involved in some way.

He does have a slightly different reaction to watching the grass warp under a big scrum, though.

''I just think that is what I will be doing Monday.''

Likewise, the Paul Simon and Aerosmith concerts earlier this year had him studying the ground more than usual.

''I was really impressed how it came back. It was a bit of an unknown to us. We had games seven to 10 days later and you would not have known there was a concert on it.''

He said there were a lot of restrictions on use in the first two years but now the pitch was being used for a lot more community events, club rugby and other local sport throughout the year.

The pitch was holding up very well to the extra demands and is renovated in about November each year to remove some grass and plant new seed.