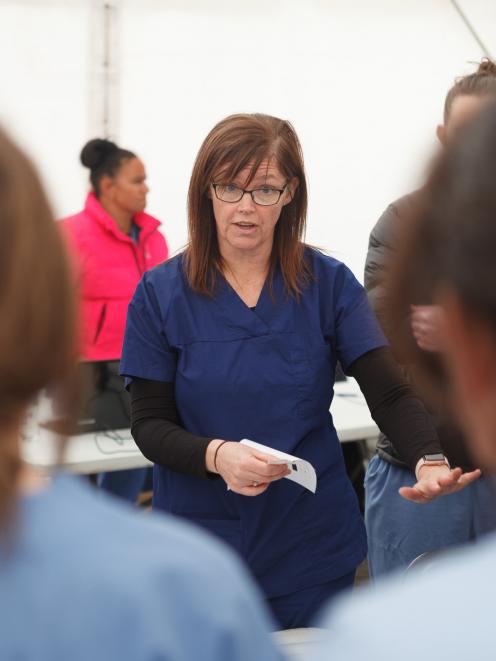 Many, such as Ms Findlay herself, have placed themselves in harm’s way to conduct Covid-19 testing, a major undertaking which will not stop despite tomorrow being International Nurses Day.

"Covid-19 has highlighted the important role that we can play in circumstances such as a pandemic," she said.

"That’s not only nursing [British Prime Minister] Boris Johnson but also providing screening, calling patients with their results and supporting the wellbeing of our community ... 2020 is also the Year of the Nurse and the Midwife and we did have all sorts of celebrations planned but all that went on the backburner.

"That was a shame, but our role has instead been highlighted in another way."

Ms Findlay has led a large team from across the health workforce, including hundreds of WellSouth nurses, in setting up community-based assessment centres in both Queenstown and Invercargill.

"Things have quietened down a little but there is still plenty to do," Ms Findlay said.

"For the first few weeks we didn’t stop for many hours at all."

Nurses from all disciplines were seconded to work at testing stations, including mental health, long-term condition and falls prevention nurses.

"They just stopped whatever it was that they were doing, got some training and just went with it," Ms Findlay said.

"They have demonstrated versatility, flexibility and a willingness to just get on with it, knowing that they had a job to do."

Whether at a testing centre or at a practice, all nurses would have learned new skills in the past few weeks, Ms Findlay said.

Practice nurses who had not been on the frontline of the Covid-19 fight had also worked through sudden shifts in their work routines, as virtual consultations, phone triage and tele-health were rushed into widespread use.

"The way nurses have adapted to change in these Covid times will stand them in good stead as we move forward," Ms Findlay said.

"It has added extras on to people who are already busy, but the fact they have stepped up and helped the southern health system get on top of the disease in our area is tremendous ... A huge outcome is that they will have forged strong relationships with other professionals, which will be useful for the health system."

Many of the nurses who trained as Covid-19 testers would have been trained vaccinators, and those people could well find themselves one day injecting some of the people they recently tested with a vaccine for the pandemic disease, Ms Findlay said.

"We don’t have such a thing yet but it would be neat for the team to go the full circle and be vaccinating to fight the disease ... That will mean success for them, I think."