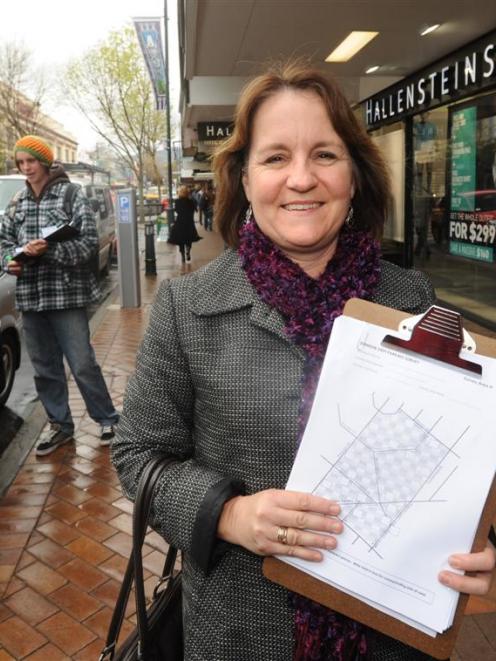 Dunedin City Council senior transportation planner Lisa Owens (foreground) led a survey of motorists' opinions on parking in Dunedin yesterday. Behind her, surveyor Tom Brough talks to motorist Tessa Williams in George St. Photo by Peter McIntosh.
Do not let months of complaints fool you - most motorists are content with changes to Dunedin's inner city parking.

At least, that is the message coming from the preliminary results of a Dunedin City Council survey of some motorists conducted yesterday.

Council senior transportation planner Lisa Owens said most motorists spoken to appeared to be happy with the July changes, which included the introduction of $1 to $4-an-hour parking, four-hour maximum stays and 153 new pay-and-display machines.

The 19 survey staff who ranged the city's streets yesterday encountered motorists who were "for the most part . . . friendly", she said.

"There's been a few people who have ranted, but for the most part people have been fine," she said.

Motorists were asked about the purpose of their visit, whether they had made a purchase, how long they parked for and (on a scale of 1 to 5) how difficult it was to find a park.

Motorists were not being asked about the cost or whether they supported the maximum four-hour stays.

Motorists no longer parking in the central city are not being asked their opinions.

Asked yesterday if the survey was reflective of everyone's concerns, Ms Owens said: "I can't answer that. That's a whole other type of survey."

Asked what she would change if she could, Ms Williams replied: "Make it cheaper."

However, Tom Brough (22), one of the surveyors, said he was not put off by the prospect of facing angry motorists.

Most were friendly and "quite keen" to have a say, with tradesmen and delivery drivers making early morning runs the most critical, he said.

"In the middle of the day, people seem to be fine with it.

"Earlier this morning, they were a little bit more negative."

The survey was repeated every two hours yesterday.

Most motorists said it was easy to find a park, with the average duration of stays "about 10 minutes", very few motorists staying more than one hour and the longest stay recorded being about 75 minutes, she said.

Some motorists were parking for short periods without paying, "gambling the meter people aren't going to come back", she said.

Complaints focused on the cost of parking, particularly around Dunedin Hospital and outside business premises.

Exact figures were not available yesterday, but Ms Owens estimated about 150 people could have been surveyed.

The data would form part of the council's three-month review of its parking regime, with a full report to be presented to councillors in November.