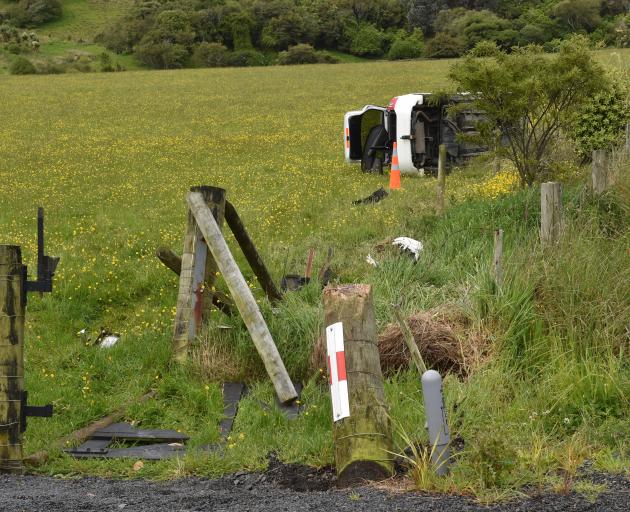 A female driver received minor injuries after her car went off Blackhead Rd and rolled on Saturday afternoon. PHOTO: GREGOR RICHARDSON
A man who decided to overtake a police car at 141kmh will not be getting behind the wheel again any time in the next few weeks.

Senior Sergeant Anthony Bond said a 21-year-old man was stopped after overtaking a police car on Dunedin’s Northern Motorway at 9.15pm on Saturday.

His driver’s licence was suspended for 28 days and infringement notice was issued.

A few hours later, at 1am on Sunday, police were called to Cashel St in South Dunedin after a ‘‘very intoxicated’’ 21-year-old man was reported to have punched an Allied Security employee in a random attack.

The victim, a 44-year-old man, received minor bruising to his face.

The alleged offender was arrested.

There was a raft of driving incidents in the city at the weekend.

At 9.12am on Saturday, a 55-year-old man failed to stop his car at a red light at the intersection of King Edward St and Macandrew Rd, in South Dunedin.

He crashed into another car, driven by a 42-year-old man. Both vehicles had extensive damage and were towed from the scene.

At 4pm that day, a 17-year-old female driver went off Blackhead Rd and hit a fencepost, causing her car to flip.

Snr Sgt Bond said the driver was possibly distracted by being on her cellphone, as there were no skid marks on the road.

At 12.05am on Sunday, a 17-year-old boy left his home in Brighton in an attempt to get to his girlfriend’s address in Mosgiel.

He then crashed his moped scooter and hit his head. He was not wearing a helmet.

The boy was aggressive towards firefighters and ambulance staff, Snr Sgt Bond said.

He was sedated and taken to hospital by ambulance. A blood sample was taken at Dunedin Hospital, and the investigation was ongoing.

At 12.59am, a 26-year-old man who said he was going to get pizza to sober up was stopped by police in South Rd, Caversham.

He recorded a breath-alcohol level of 750mcg.

Another drink-driver was stopped in South Rd about half an hour later. The 41-year-old woman recorded 523mcg.

And at 3am, police stopped a 25-year-old man who ran a red light in Great King St, north Dunedin, and subsequent lights in Cumberland St.

He was stopped in Frederick St and recorded a breath-alcohol level of 600mcg.