Pedestrian precinct may come with conversions 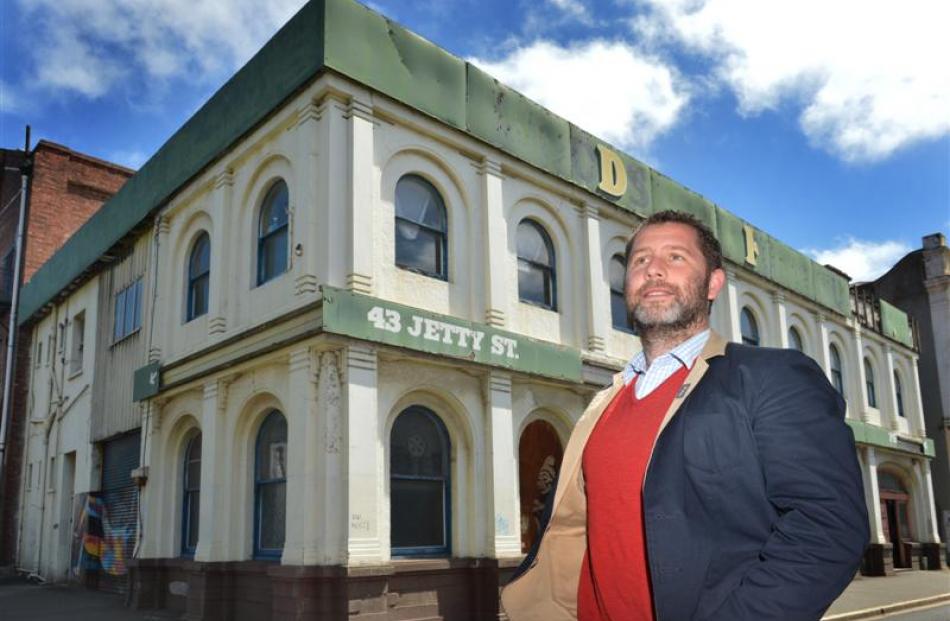 Building owner Dr Hayden Cawte's plans to convert the 130-year-old Woodstock Building into commercial office space could be part of a wider transformation of Jetty St into a new pedestrian-only precinct. Photo by Peter McIntosh.

Plans to convert another building in Dunedin's warehouse precinct into a trendy Google-style office space could be just the tip of the iceberg, it has been suggested.

Upgrading the 130-year-old building would cost a six-figure sum, including earthquake-strengthening, a refurbishment and fit-out for commercial tenants, he said.

The company was yet to seek a resource consent, but had already been approached by potential tenants including IT companies and design studios, he said.

Dr Cawte told the Otago Daily Times he was aware of four other developments involving ''high-profile tenants'' confirmed for the precinct, but yet to be made public.

He did not divulge details, saying they were commercially sensitive, but predicted they could bring another 100 workers into the area over the next 18 months.

That was on top of the jobs created by other new arrivals, including Wine Freedom and Vogel St Kitchens, which opened its doors this week.

The ODT has also heard of an IT company eyeing another heritage building in the area, and council heritage policy planner Dr Glen Hazelton yesterday said other projects were being discussed.

That included one that was ''pretty close'' to being announced, but he could not yet reveal details.

''There's interest in a couple of buildings down there,'' he said.

Dr Cawte said the upgrade of the Woodstock Building aimed to create a ''trendy'' open-plan office environment, reminiscent of Google and other technology start-ups.

The exact design would depend on tenants' needs, but his plans would suit non-traditional IT or technology companies and their employees, Dr Cawte said.

The precinct already had access to ultra-fast broadband, and offered the chance for technology companies to ''co-locate'' with each other and Dunedin-based technology company ADInstruments, he said.

Dr Cawte, who owned three buildings in the precinct, said demand in the area would only grow as a result of the city's Gigatown win.

''The stars have aligned in many ways for Dunedin at the moment, and [Gigatown] is just yet another thing that helps it along.

''I definitely see a good, positive future for the area, which is why we've invested in here,'' he said.

The Woodstock Building's refurbishment could also create a mini-precinct alongside its neighbour, the historic A. H. Reed building in Crawford St, which was also set for redevelopment.

Both buildings could be linked to Vogel St by a new pedestrian-only precinct, if a proposal to stop vehicles using a narrow section of Jetty St, below the Cumberland St overbridge, won support.

Dr Hazelton said council staff were discussing the idea with the area's building owners, most of whom supported it.

Options would be presented to councillors as part of next year's long-term plan budget meetings in March, he said.

The council had $500,000 budgeted for 2015-16 for the next stage of revitalisation work, between Jetty and Police Sts, which could be used for the work, he said.

Closing the area to traffic could address safety and congestion concerns, and help unlock ''a whole lot of opportunities for the area under the bridge as well'', he said.

The plans for the Woodstock Building were the latest sign of progress in a precinct which has been undergoing a transformation in recent years.

Building owners including the Macknight family and Lawrie Forbes had invested in the refurbishment of their buildings to draw in new tenants, encouraged by the council's revitalisation efforts and heritage funding support.

The new arrivals included ADInstruments in the former Donald Reid store, Psychology Associates in the National Mortgage and Agency building and the Duke of Wellington pub in the Queens Garden Court.

The upgrade of more than a dozen buildings had either started, or been completed, to protect the ageing buildings and make way for a mix of new apartments, retailers and office spaces.

Most recently, that included the arrival of the Vogel St Kitchen, which opened this week, and July's announcement the historic A. H. Reed building would house new apartments, a cafe and reading room.

Building owner Stephen Macknight was also understood to be progressing the redevelopment of the dilapidated Gresham Hotel, overlooking Queens Gardens, the former chief post office was undergoing a rebirth, and the Loan and Mercantile building was set to follow in their footsteps.