And while one prominent North Otago penguin advocate is calling for more to be done to save the species, a long-time Department of Conservation (Doc) penguin conservator declined to speculate on the vulnerable native bird’s future.

The population bounced back by 1996-97, with an estimated 635 pairs breeding, but has since dropped away again dramatically.

Doc technical adviser Bruce McKinlay, who has worked in penguin conservation for about 30 years, said Otago was either at the "bottom of a trough after a period of time of really dramatic decreases — or we could be sitting on the edge of something else." 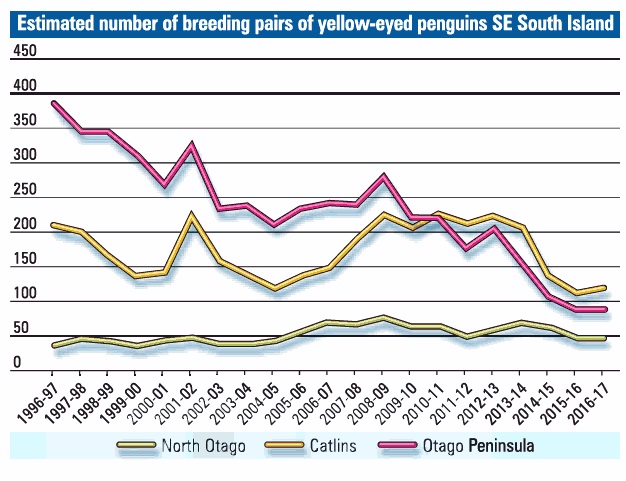 There would be no definitive answer until next season when further population estimates would be done.

Importantly, penguins lived in two distinct environments — nesting on land and foraging at sea — and the factors that could influence success or failure for the species were complex, at times even random.

"When it is good out there in the marine environment, it is very good for yellow-eyed penguins. When it is bad out there, or there’s predation, or a disease event, or a climatic event, then it’s really, really bad."

Penguin Rescue manager Rosalie Goldsworthy, who cares for the birds at Katiki Point, near Moeraki,  was pessimistic about the birds’ future. She said the birds were now pressured by more disease and there were fewer juvenile birds to come through as new breeders.

Moeraki’s yellow-eyed penguin colonies were affected by an outbreak of avian diphtheria for the second year in a row this season.

In November, as the disease ravaged Moeraki’s penguin chicks, Mrs Goldsworthy said more needed to be done or the birds would be wiped out in mainland New Zealand.

"There are no new penguins coming through — or not enough of them. Next year there will be hardly any extra [new] nests either. The big low will continue."

Mr McKinlay said  predation by introduced pest species on land was a major problem, but pest control was taking effect.

It was the marine environment causing the problems, so it was hoped the answers were there.

The penguins (hoiho in Maori) also live on Stewart Island, Codfish Island and further south on the Auckland Islands and Campbell Island.

While there was some monitoring done at those remote sites, there were gaps in the Doc’s knowledge, Mr McKinlay said.

"We don’t actually have a handle on the whole population."

Where penguin population statistics were known "they are not doing well".

"But how badly it is going, we don’t know either."