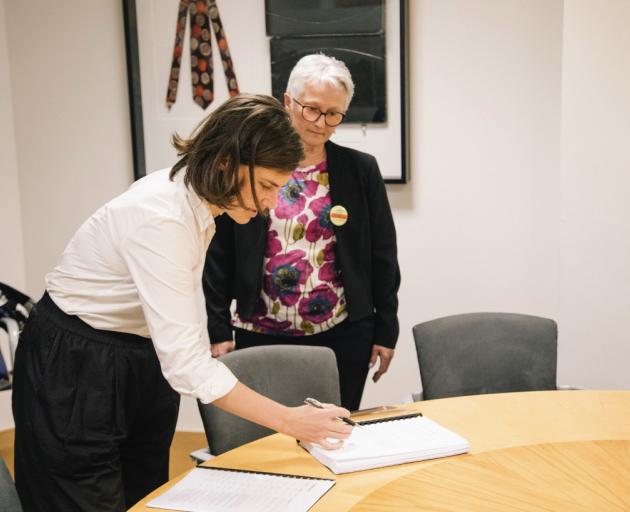 Corinda Taylor watches Green MP Chloe Swarbrick as she accepts her petition in Wellington yesterday. Photo: Supplied
A Dunedin-instigated petition which aims to level the playing field when the courts consider legal issues relating to suicide is about to be presented to Parliament.

Signed by more than 3800 people, the petition, started by Life Matters Suicide Prevention Trust founder Corinda Taylor, calls on the Government to introduce free legal representation for suicide bereaved families and cover the costs of their expert witnesses.

Mrs Taylor was inspired to start the petition while preparing for the imminent inquest into the death of her son Ross.

While other parties at the inquest are state-run organisations and have publicly-funded legal teams, the Taylor family is having to fund its own costs and represent itself.

The legal fees would cripple most families while they were vulnerable and grieving, Mrs Taylor said.

‘‘There are thousands of families going through what we are going through. It is important to get it on the national radar.

‘‘My expectation is that our politicians will do something; they cannot allow this unfairness to carry on.’’

The petition also calls on the Government to appoint more coroners, to speed up the inquest process.

The petition was handed to Green list MP Chloe Swarbrick in Wellington yesterday.

‘‘We have handed over previous petitions to her, she supports the cause, which is the most important thing ... she is someone who is willing to pick this up and take it further.’’

Mrs Taylor hoped both the justice and health select committees would consider the petition, which Ms Swarbrick is expected to present to Parliament today.

That would be unusual though as parliament’s Standing Orders say petitions are referred to a committee, and that the clerk of the house decides which is most appropriate.